On November 11, at around 2 AM, Lata Mangeshkar was admitted to Breach Candy Hospital, Mumbai. She was in a critical condition and was kept on ventilator, as per reports. Later, Lata's team issued a statement saying that the 90-years-old singer has returned to her home and is recovering. 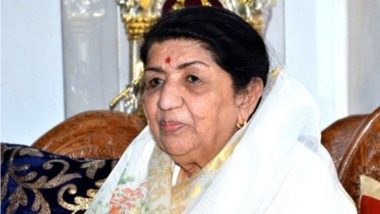 Lata Mangeshkar: The iconic singer has voiced some of the greatest actresses across decades. (Photo Credits: Twitter)

Lata Mangeshkar fans are left worried all over the globe. The nightingale of Bollywood was rushed to the  Breach Candy Hospital, Mumbai due to health problems, reports The Hindu. The 90-year-old singer was admitted to the hospital in a critical condition in the early hours of Monday, November 11. She complained about having trouble breathing. The news daily added that she was kept on ventilator in the hospital. Later, an updated report by ANI suggested that Lata Mangeshkar has returned to her home and is recovering. At the hospital, she was attended by brilliant doctors like Dr Farokh E Udwadia, Breach Candy's senior medical advisor. Lata Mangeshkar 90th Birthday: President Kovind, Dharmendra, Amitabh Bachchan and Other Bollywood Celebs Pour Heartfelt Wishes for the Legendary Singer.

Lata Mangeshkar's team issued a statement saying, "Lata Mangeshkar had chest infection so she was taken to Breach Candy Hospital, Mumbai today. She is now back at her home and is recovering." A source told The Hindu that she had developed pneumonia and left ventricular failure.

Earlier, an insider at the hospital had revealed to PTI that Lata was brought to the hospital at around 2 am. Lata Mangeshkar Trying To Get A Good Picture Of Her Birthday Cake Is So Us (View Pic).

On November 10, Lata Mangeshkar had tweeted about the upcoming movie, Panipat. Her niece Padmini Kolhapure stars in the movie, so Lata requested her fans to extend the support to her.

Mangeshkar, who has sung over 1,000 songs in Hindi film industry, was conferred with the Bharat Ratna, which is the highest civilian honour in the country, in 2001.

(The above story first appeared on LatestLY on Nov 11, 2019 05:27 PM IST. For more news and updates on politics, world, sports, entertainment and lifestyle, log on to our website latestly.com).