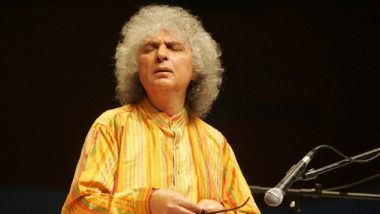 Later, hundreds of people could be seen on the roads bowing and offering their final farewell to the legendary musician draped in the tricolour as his flower-bedecked funeral cortege wended its way to the crematorium. Born on January 13, 1938, Pt. Sharma brought the humble folk-music instrument 'Santoor' onto the world stage with his unique renditions.

He collaborated with the eminent flautist Pt. Chaurasia as the Shiv-Hari duo, composed music for several films including "Silsila", "Lamhe", "Chandni", "Darr" and others. Pt. Sharma was bestowed with honours and accolades including the Padma Vibhushan in 2001. Top leaders, including Prime Minister Narendra Modi, Chief Minister Uddhav Thackeray and other dignitaries mourned the death of the 84-year-old Pandit Sharma following a cardiac failure on Tuesday morning.

(The above story first appeared on LatestLY on May 11, 2022 06:39 PM IST. For more news and updates on politics, world, sports, entertainment and lifestyle, log on to our website latestly.com).