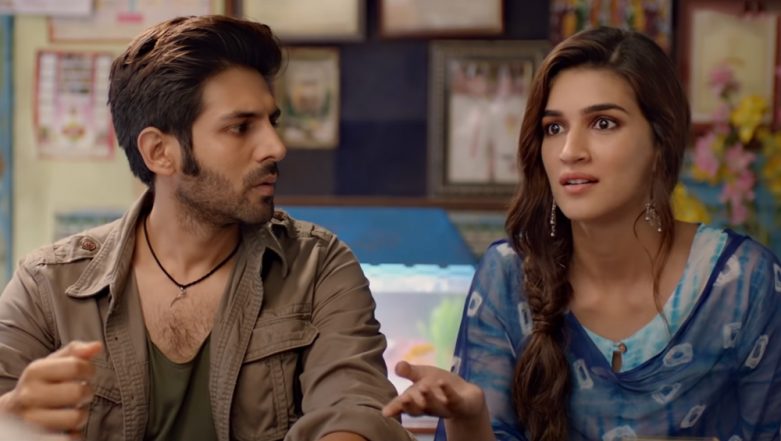 Laxman Utekar's directorial venture Luka Chuppi, which released on March 1, is currently performing well at the domestic box office despite new releases arriving in theatres. Starring Kartik Aaryan and Kriti Sanon in the lead, the romantic comedy opened to good reviews and since then has been raking in moolah at the ticket windows. After surpassing the Rs 50 crore mark and becoming Kartik's highest week 1 grosser, the film is now slowly heading towards the Rs 100 crore club. Since its hardly facing any competition at the BO, Luka Chuppi will continue to get cash registers ringing this week as well. Luka Chuppi Box Office Collection Day 10: Kartik Aaryan and Kriti Sanon Starrer Witnesses Upward Trend, Mints Rs 67.36 Crore.

Further, trade portal Boxofficeindia.com stated, "The second week for this film will do around 18 crore nett which is a decent hold. the lifetime business of this film is probably going to be in the 80-85 crore nett region. The target for the film is probably a 100 crore GROSS figure in India." Luka Chuppi Box Office Collection Day 9: Kartik Aaryan and Kriti Sanon Starrer Rom-Com Rakes in Rs 62.05 Crore.

Kartik starrer released alongside Sushant Singh Rajput and Bhumi Pednekar's film Sonchiriya. However, the dacoit drama failed miserably at the box office and was out of most theatres just after week 1. As for Luka Chuppi, it's been doing well since day 1 and will continue to make money going forward.