They were pleasantly surprised to find that the legendary director had watched their film and even appreciated it. 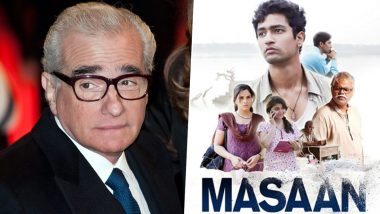 It is always a proud moment for a filmmaker and the cast of the flick when it gets recognized widely. Especially, when a renowned filmmaker or actor praises a film, it automatically earns extra points for existing! A similar thing was recently experienced by the team of Bollywood film, Masaan. The film was appreciated by none other than, stellar Hollywood film director, Martin Scorsese. The cast could not help but beam with joy and pride. Vicky Kaushal Shares a Heartfelt Fan Tribute That Traces His Journey From Masaan to Uri, and We Agree With Every Word (View Post).

In a video call, Masaan maker, Neeraj Ghaywan was in a chat with the cast of the film including Vicky Kaushal, Shweta Tripathi and Richa Chadha. They were pleasantly surprised to find that the legendary director had watched their film and even appreciated it.

In the video, we can see Neeraj reading out the e-mail sent by the The Irishman director praising the movie. Richa even sweetly complained that why did Neeraj tell this to them after five whopping years! Check out the heartwarming video below.

Martin Scorsese sent email for Masaan and Neeraj sharing that after five years this was not shared even with his stars. pic.twitter.com/w2zaltwAn8

Speaking of Masaan, the 2015 film was thoroughly appreciated by the Indian as well International critics; and fans. It was also shown at the New York Dalit Film and Cultural Festival in 2019. The movie was also a game changer for Vicky Kaushal who had just stepped into the Bollywood industry. This film earned him the token of deserving actor alongside Richa and Shweta. It is never too late to congratulate, so congratulations team Masaan!

(The above story first appeared on LatestLY on May 18, 2020 08:59 PM IST. For more news and updates on politics, world, sports, entertainment and lifestyle, log on to our website latestly.com).