She promised that she will try to fast next year and wished for Shahid's health. She posted this cute message on her Instagram story and had us wondering how Shahid, who is away for a shoot, must have responded to it. 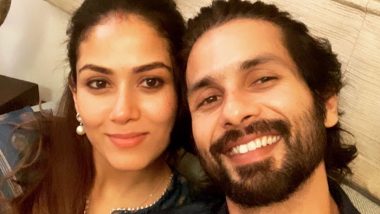 As many women in the country celebrated Karwa Chauth yesterday, our eyes were on Bollywood divas who also indulged themselves in these festivities. From Shilpa Shetty Kundra to Bipasha Basu, several actresses shared pictures from their Karwa Chauth ceremony but it was Shahid Kapoor's wife Mira Rajput's post that won our hearts. Shahid Kapoor and Mira Rajput Follow in Jennifer Lopez and A-Rod’s Footsteps By Investing in Yoga Wellness Startup.

The star wife did not fast this Karwa Chauth and her reason was hilarious. Wishing Sasha a happy Karwa Chauth, Mira said that she cannot fast because she loves food as much as she loves him. She promised that she will try to fast next year and wished for Shahid's health. She posted this cute message on her Instagram story and had us wondering how Shahid, who is away for a shoot,  must have responded to it. 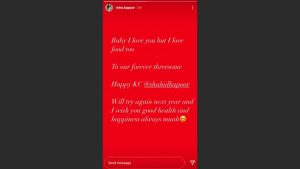 A few days ago, Shahid had also shared a blurry picture of himself and Mira Rajput, captioning it as, "I miss you," followed by a heart emoji. Reacting to his cheeky post, Mira Rajput wrote, "Aren't you glad I didn't put up the #imissyoutoo post."

Shahid Kapoor and Mira Rajput got hitched back in 2015 and it has been a fairy tale ever since. The two are madly in love with each other and we see glimpses of it from time to time through their social media PDA. The couple welcomed daughter Misha in August 2016 and later had a son, Zain, in 2018. Nani's Jersey Director Gowtam Tinnanuri Will Direct Shahid Kapoor in the Film's Hindi Remake.

On the work front, Shahid Kapoor will next be seen in Jersey which is a Hindi remake of the Telugu film of the same name. Gowtham Tinnanuri, who helmed the Telegu film, will also be directing the Hindi version. The actor will essay the role of a cricket fanatic whose dream to join the Indian cricket team is fulfilled when he is in his 40s.

(The above story first appeared on LatestLY on Nov 05, 2020 01:18 PM IST. For more news and updates on politics, world, sports, entertainment and lifestyle, log on to our website latestly.com).