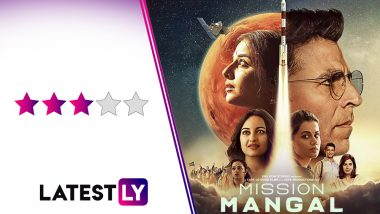 Mission Mangal Movie Review: In 2010, Mission Director Rakesh Dhawan (Akshay Kumar) and his Project Director Tara Shinde (Vidya Balan) see a huge failure when a space launch goes wrong. As a 'punishment' of sorts, ISRO shunts Rakesh to Mars Mission project, which is only bound to happen in 2022. His new workplace is a desolate warehouse with employees working as if they are in a government office. Tara, meanwhile, feels guilty about Rakesh's new assignment. Mission Mangal Box Office Prediction: Akshay Kumar's Multi-Starrer To Rake in Over Rs 20 Crore on the Opening Day? Find Out!

And it is she who has a stroke of brilliance on how to kick-start their conquest for Mars within three years, that too in an efficient manner. Rakesh and Tara persuade their seniors to get a green light for their Mission Mangal. While their project is approved, to their annoyance, they are allocated a team of novices to work with. Together they have to figure out how to achieve their goal within the target time and at a fraction of the cost of NASA's Mars missions.

Mission Mangal, directed by South filmmaker Jagan Shakti and co-written by R Balki, is a fictional retelling of ISRO (Indian Space Research Organisation)'s successful Mangalyaan mission of 2013. That moment is considered as one of the biggest milestones of Indian space travel, and left the West in awe of how India managed this feat, that too at a relatively cheaper cost. That premise itself is enough to win over the audience and the presence of Akshay Kumar means that there is a populist edge too.

There is no denying that Mission Mangal has most of the trappings of a post-Baby Akshay Kumar film. We have the superstar repeat the same kind of act that we saw in Gold last year, where he has to convince his bone-headed seniors of his vision and achieve exactly that at the very end. Not to mention, the generous infusion of nationalism. You have references to the Indian army, and even the sacred cow gets a mention in an important scene. And just in case, you have any doubts to which direction the flag is waving, Mission Mangal ends with a byte from a real-life speech of Modiji.

Ignoring the slight propagandist tendencies, Mission Mangal turns out to be a likeable film with enough engaging stuff. It takes time to heat up the fuel, especially in the first half, where the focus is mostly on Rakesh and Tara. Mission Mangal First Reactions Out: Akshay Kumar and Vidya Balan's Movie Gets Showered with Praises and Positive Reviews.

We see repetitive scenes of Rakesh pitching for his project and clashing with NASA import (Dalip Tahil), whose biggest achievement in the film is his fake accent and the ability to annoy us every time he puts up a degrading statement. Tara, being a woman - I am not sexist, the movie is - faces similar conundrum with her husband (Sanjay Kapoor) who wants her to resign to take care of her family. In the process, the rest of the main cast hardly gets much to do in the first half. It is also annoying to see the writers use broader strokes to draw each character, whether major or minor, with the gender deciding their defining factors,

If Rakesh is a bachelor who dedicates his entire life to his work, then Tara is tied to her family. The rest of the team members are also put in specific brackets. Eka Gandhi (Sonakshi Sinha) is a NASA aspirant, who you know will finally find 'home' in ISRO. Kritika Aggarwal (Taapsee Pannu) has to take care of her injured husband, who is also a soldier. Varsha Pillai (Nithya Menen) faces taunts from her mother-in-law for not bearing a child.

Neha Siddiqui (Kirti Kulhari Sehgal) faces discrimination getting a house because she is Muslim and a divorcee. Parmeshwar Naidu (Sharman Joshi) is a bachelor and 'virgin' who is besotted with Eka (we need a romantic track, na). Ananth Iyer (HG Dattatreya) is the amiable Pierce Hawthorne of the group, Community fans, get that hint!

While this bracketing feels annoying, it does lead to some heartwarming moments and eventually, bigger payouts. Each character's personal backstory helps in playing an important role in their mission. The second half gives most of the other characters plenty of room to shine, so much that Akshay Kumar gets sidelined. It feels nice for the biggest name in the cast to let others steal the show, especially since Rakesh is the only character we don't get to see any backstory. Mission Mangal Special Screening: Akshay Kumar, Sonakshi Sinha, Nithya Menen, Taapsse Pannu, Kirti Kulhari Make A Stunning Appearance, and Delhiites Cannot Contain Their Excitement! Watch Video.

The best character is that of Tara, who is the coolest on-screen mother seen in recent times. It may really seem like an extension of what Vidya Balan played in Tumhari Sulu, but there is so much to like about her. After all, she got into ISRO because she watched Star Wars! Though, it begs me to ask this - why didn't it inspire her to become an astronaut instead?

Tara has no qualms in her son wanting to convert to Islam just to be a good musician a la AR Rahman, no matter how lame it sounds. Or when she and her husband land in the pub where her daughter has discreetly gone to hang with her friends, and be cool about it. I could even say she is the true hero of the film, as she is the reason why this Mission Mangal even happens. Similarly, even others in the main roster get their moments to shine eventually. There is plenty of cheese, yes, and Parmeshwar-Eka's potential romantic track feels unnecessary. So is that random fight scene in the Metro, which is ripped off from Chak De! India, even though Sonakshi is quite uproarious in here.

But I liked Mission Mangal the most when the focus returns to the mission itself. The science involved is dumbed down for the audience to the point of using frying puris to explain how to save fuel. I am no expert myself, so I have no clue if the tricks used by the team to make the launch cost-effective are true to reality. Considering that Mission Mangal is made with the blessings of ISRO, I think they are not far from the truth. Anyway, the point is these scenes are quite engaging. Especially, the climax, despite us knowing how it will end, will keep you thrilled with effective use of BG score and fine editing. It is in these scenes where the skills of director Jagan Shakti truly shine.

The VFX, while not as polished as seen in last year's Zero, another movie that involves a Mars mission, is not bad enough to make you look the other way.

Akshay Kumar puts up a restrained act for a character which is a milder, less irksome version of Tapan Das that he played in Gold. He is extremely genial and that works in favour of his performance. Sonakshi Sinha, Kirti Kulhari, Sharma Joshi, HG Dattatreya, Nithya Menen, Taapsee Pannu (who I feel was underused) all work admirably as an ensemble and pitch in fine performances. Mohammed Zeeshan Ayyub is excellent in the scene where he convinces his wife to return to her work instead of being a nurse. Sanjay Kapoor is highly convincing as the misogynistic husband who is trolled by the rest of his family. Purab Kohli gets the best line in the film that will bring the house down. The actor who plays Vidya's son is good.

But if there is any actor who stands out, it is Vidya Balan. Even if we have seen her in similar roles, Vidya brings a sense of affability that glows in even the most awkward of the movie's moments (the scene where she is mistaken as a canteen worker qualifies for that). Watch her in the scene where she explains her mission's secret formula to her using a yoyo. She brings such enthusiastic conviction on her face, that if she says a launch to Pluto is possible, I would put money on that! Akshay may be the film's Selling Point, but Vidya is the hero.

- The Rest of the Main Act

- A Couple of Actors Are Underused

- Akshay Kumar Tropes Should Have Been Diluted

Mission Mangal doesn't have the layered texture of Hidden Figures nor the complexity of First Man. Instead, it relies on many of its heartwarming moments and an adorable cast to propel the film ahead, and ends up being an engaging watch. The movie may not land on Mars, but it does meet halfway when it comes to our expectations.

(The above story first appeared on LatestLY on Aug 14, 2019 11:03 PM IST. For more news and updates on politics, world, sports, entertainment and lifestyle, log on to our website latestly.com).