Neeti Mohan’s Pre-Bridal Shoot With Sisters Shakti, Mukti and Kriti, Is All Shades of Sibling Love 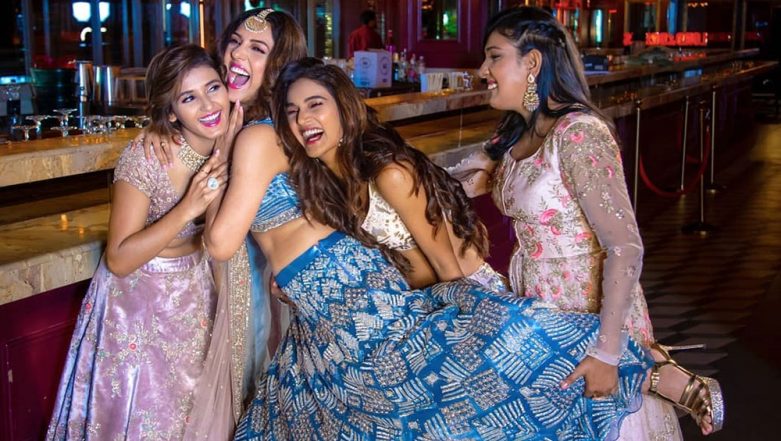 While Valentine’s Day is bestowing its magic on much-in-love couple across the quarters, Bollywood singer Neeti Mohan has all the more reasons to enjoy the day of Love. The singer is getting married to boyfriend Nihaar Pandya in the Falaknuma Palace in Hyderabad on 14 and 15 February. Ahead of that, the singer took part in a pre-bridal photo shoot with her sisters Mukti, Shakti and Kriti Mohan, photos of which will make your heart skip a beat. The four sisters are simply too cute to handle.  From London With Love! 'Street Dancers' Varun Dhawan and Shraddha Kapoor Send Valentine's Day Wishes For Their Fans.

The wedding bells ringed louder when the couple was on The Kapil Sharma Show. While the show is famous for its comedy punchlines, the romance is not far behind. The actor, not only opened up about their relationship, but also revealed that they were ready to walk the aisle as man and wife. They asserted that they will tie the knot on Valentine’s Day in a ‘families only’ ceremony. Recalling his proposal, Nihaar had revealed, "We were taking a stroll around my farmhouse and upon reaching a pre-decided spot under a tree, I went down on one knee and asked her, ‘Tu shaadi karegi mujhse?

The photos of the pre-bridal shoot with the bride’s sister have taken the internet by storm. While the fans cannot stop going gaga over the sisters, the pictures also reveal the strong bond that keeps all the Mohan’s be together.Street Dancer First Poster Out and Varun Dhawan is The #1 Rule Breaker! See Pic.

Neeti too shared the picture from her pre-bridal shoot, ‘Living the Moment’:

A source close to the singer revealed to Mirror, “The nuptials will be preceded by the Mehendi function on the afternoon on Valentine’s Day, February 14, followed by the Sangeet and ring ceremonies the same night. The wedding will take place at Taj Falaknuma Palace, in Hyderabad. Singer Harshdeep Kaur, who performed live at Deepika Padukone and Ranveer Singh’s wedding function at Lake Como last year, will reportedly perform at one of Neeti and Nihaar’s functions too.” The couple also plans to host a wedding reception for their industry friends in Mumbai.