Not just Rishi Kapoor and Sushant Singh Rajput, did Academy also paid tribute to the late Soumitra Chatterjee and Shashikala? Here's the truth as to how these departed celebs were eulogised by Oscars 2021, though they were missing from the In Memoriam video tribute. 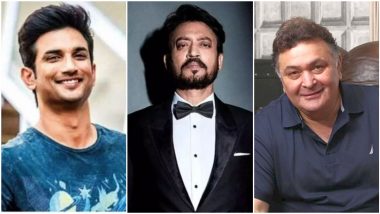 One of the most loved and poignant segments of the Oscars 2021 is the 'In Memoriam' segment. The segment pays tribute to dear departed celebs who left us in the time between the two award ceremonies. During the 93rd Academy Awards, the 'In Memoriam' section featured two Indian celebs who passed away in 2020 - Oscar-winner Bhanu Athaiya and actor Irrfan Khan. They were featured along with other loved Hollywood celebs like Chadwick Boseman, Sir Sean Connery, director Joel Schumacher, actress Cloris Leachman among others. Oscars 2021: Irrfan Khan And Bhanu Athaiya Remembered In The Memoriam Section.

However many Indian fans were disappointed with the absence of actors Sushant Singh Rajput and Rishi Kapoor in the segment, as they had also passed away last year. There are others who claim that these actors were also paid tribute to in the segment. However, as you can see in the tribute video below, these actors are missing among those honoured and eulogised.

So what's the truth?

Well, the Academy might have included only Irrfan and Bhanu Athaiya in the 'In Memoriam' video, more so because these two were globally recognised faces from our cinema who passed away last year. However, Rishi Kapoor and Sushant Singh Rajput's mentions can be found in ABC network's (they telecast the Oscars) In Memoriam gallery.

Rishi Kapoor in In Memoriam Gallery

Soumitra Chatterjee in In Memoriam Gallery

Shashikala in In Memoriam Gallery

There are other departed celebs too who have their names but do not find place in the video tribute, as you can see in the link here. It's most probably due to the availability of space in the video, and the Academy choosing those faces they believe are more known to the American audiences.

(The above story first appeared on LatestLY on Apr 26, 2021 01:44 PM IST. For more news and updates on politics, world, sports, entertainment and lifestyle, log on to our website latestly.com).