Parineeti Chopra Opens Up About Criticism About Her Weight, Says ‘I Agreed With Them’

She tagged body-shaming as the ‘most ridiculous thing on earth’ and compared it to someone criticising something as natural as the colour of one’s eyes. 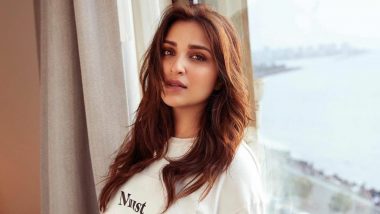 Parinnet Chopra is currently on a roll. After an amazing performance in The Girl On The Train, she is now impressing everyone with her stint in Saina. Dibakar Banerjee’s Sandeep Aur Pinky Faraar which reunited Parineeti with her Ishaqzaade co-star, Arjun Kapoor, is also getting rave reviews from the audience and the critics, Parineeti sure has come a long way but the journey has not been very easy for her. Parineeti Chopra's Maldives Holiday Pictures are all About Sun, Sand and Sea!

The actress, in her initial days of acting, was often criticised for her weight. The actress turned the tables and started working on herself. She stunned everyone with her dramatic weight loss in 2015 and is now often seen flaunting her curves in sexy photoshoots and hot ensemble. Talking about the same, the actress, however, expressed that the criticism did not bother her and she used agree with the critics who used to call her out for her weight.

She tagged body-shaming as the ‘most ridiculous thing on earth’ and compared it to someone criticising something as natural as the colour of one’s eyes. Talking to Bollywood Bubble, Parineeti said, “I agreed with them that I wasn’t looking my best. I wasn’t doing my best for my fitness. I think I would have gotten hurt if I was doing everything that I could and I was really my fittest, and then people didn’t like the way I looked. I think that would have affected me. But I agreed with them because I knew I wasn’t doing my best.”

Criticising the tradition of body-shaming, the actress added, “Body-shaming is the most ridiculous thing on earth. It is like shaming someone for having black eyes and saying, ‘You have black eyes? What is wrong with you? How can you have black eyes?’ It is something natural and what you are born with. But every human being should strive to be their fittest. They shouldn’t strive to be the skinniest. You can be fit at your body type." Did Parineeti Chopra Just Confirm Her Relationship With Charit Desai?

Talking about Saina, which released last yesterday, was early reviewed by Raveen Tandon. She tweeted, "Just had the pleasure of seeing #saina !What a fantastically made movie ! Fantastic performances by lil Saina- played by a real junior champion #naishakaurbatwe , and ofcourse @ParineetiChopra you did us proud ! Effortlessly played! @NSaina a must watch for our children!" The film is directed by Amole Gupta and is a biopic sports drama based on the life of Badminton star Saina Nehwal.

(The above story first appeared on LatestLY on Mar 27, 2021 12:54 PM IST. For more news and updates on politics, world, sports, entertainment and lifestyle, log on to our website latestly.com).