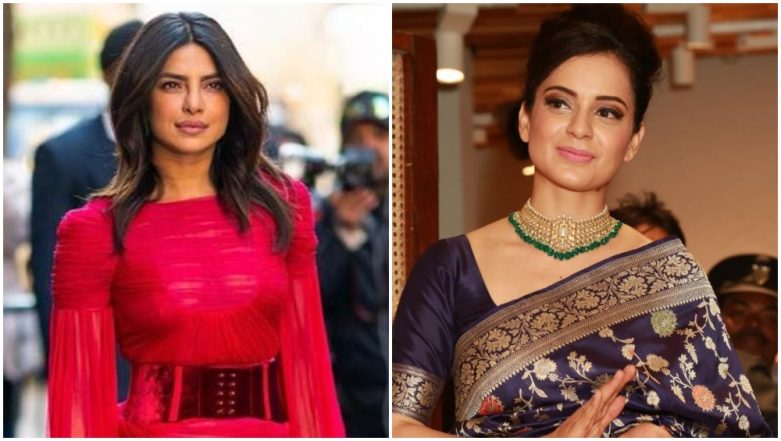 Priyanka Chopra was embroiled in a controversy when a mere tweet of hers supporting the nation was used to tag her as a hypocrite. It was soon after the Pulwama attack when PeeCee tweeted 'Jai Hind' to show her support for Indian Government's move. However, Pakistani activists and political leaders slammed her for showing hypocrisy as her views and beliefs didn't resonate with the spirit of a UN Goodwill Ambassador. Though the actress expected support from the film fraternity, only Kangana Ranaut was willing enough to react to it.

The Manikarnika actress in her recent media interaction was asked about the controversy and what's her take on it. “It’s not an easy choice to make. When you are stuck between your duty and your emotions, being a UNICEF goodwill ambassador sure you can’t limit your identity to one nation, but how many of us choose heart over mind every day," Kangana said. Jameela Jamil Won't Comment on the Priyanka Chopra Controversy Says She's Not Interested in Making it a Media Manipulated Cat-Fight.

Meanwhile, Pakistan's Minister for Human Rights Shireen Mazari has demanded that Priyanka should be removed from her post of UNICEF's Goodwill ambassador. 'Ms Chopra has publicly endorsed this Indian government position and also supported the nuclear threat issued to Pakistan by the Indian defence minister. All this goes completely goes against the principles of peace and goodwill that Ms Chopra is supposed to uphold as a UN Goodwill Ambassador for peace,' read an excerpt from her letter to UNICEF. The organisation is yet to take a call and we hope nothing influences their decision.