Radhe: Did You Know The Director Of Marathi Film That Antim Is Remake Of, Appeared In Salman Khan's Movie?

Radhe which released on May 13, has Pravin Tarde playing Dagdu Dada, a local goon. He is the director of Mulshi Pattern, the movie Salman Khan and Aayush Sharma's Antim: The Final Truth is based on. He reveals why he did the role in the film. 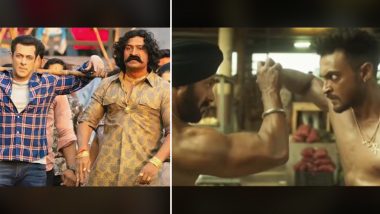 It has been a while since Radhe released and every day we hear something new about the film. There's a character of burly local goon on Salman Khan's side in the film which is played by none other than famous Marathi director Pravin Tarde. He is the man behind Mulshi Pattern which forms the crux of Salman Khan-Aayush Sharma starrer Antim: The Final Truth. The director insists that before anybody watches the 'commercialised' version of his movie, they should check out the original.  Radhe: Salman Khan Files Defamation Case Against Kamaal Rashid Khan for the Review of His Film (View Post)

Tarde told News18, Tarde said, "It gets commercialised here. Even genres get changed sometimes. I am not doing it so I don’t know what changes they have made and what thought has gone behind it. I have come to know that there have been some commercial changes made in the Hindi version. I saw the scene that was revealed which was in high speed." He is however glad that the movie is being made in Hindi so that it can reach a larger audience. Salman Khan’s Radhe Streaming Price Slashed To Rs 149 Within 12 Days Of Release On ZEEPlex

But what Tarde's fans wanted to know was why did he do such a small role in Radhe? The length doesn't matter to the director, the intent of doing it does. "I wanted to build relations with Salman Bhai and the experience of working with him has been terrific. I loved him as a human being. As I said, if a commercial film goes from my end, I don’t prefer it," he adds.

We wonder if Salman asked him to feature in Radhe because he is part of the remake of the director's 2018 film.

(The above story first appeared on LatestLY on May 28, 2021 05:40 PM IST. For more news and updates on politics, world, sports, entertainment and lifestyle, log on to our website latestly.com).