Rakesh Roshan Wants Hrithik Roshan and Ranbir Kapoor in a Movie Together; This 2009 Film Had Made It Happen, Well Almost!

Hrithik and Ranbir are both great actors with Greek God looks, and any movie with them together is going to create a wave in the box office. However, we have overlooked the fact that there was one movie that had these two actors in it, but it didn't create much of a flutter at the box office. 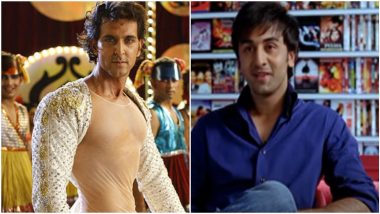 While speaking recently in an interview, actor-filmmaker Rakesh Roshan reminisced the good old days spent with his dear friend and Aap Ke Deewane co-star, the late Rishi Kapoor. He talked about the family outing they used to have in which he said, "I can never forget the outstation family holidays we took- both Hrithik (Roshan) and Ranbir (Kapoor) were with us; they were kids then. I wish to see Hrithik and Ranbir together in one film." Rakesh Roshan Reveals How Ranbir Kapoor Consoled Him Over the Phone As He Broke the News Of Rishi Kapoor's Death.

Now that's quite a dream casting, won't you say? Hrithik and Ranbir are both great actors with Greek God looks, and any movie with them together is going to create a wave in the box office. However, we have overlooked the fact that there was one movie that had these two actors in it, but it didn't create much of a flutter at the box office. It's also another matter that these two stars were not the main leads in the film, that was the launchpad of a brilliant filmmaker in Bollywood.

The film we are talking about is the 2009 movie Luck By Chance, which marked the directorial debut of Zoya Akhtar. Lucky By Chance, starring Farhan Akhtar and Konkona Sen Sharma in the lead, is about the workings of Bollywood as an industry and features an ensemble cast, which also includes the late Rishi Kapoor (playing a producer), and an array of star cameos. Zoya Akhtar Birthday Special: From Luck by Chance to Gully Boy, Ranking All the Films She Directed From Worst to Best.

Hrithik Roshan had an extended cameo in the film, of that of Zafar, a reigning superstar whose backing out from a film (to get cast in a Karan Johar movie) paves way for Farhan Akhtar's Vikram, an 'outsider', to break through into Bollywood.

Meanwhile Ranbir Kapoor, playing himself. is one of the few male actors whom Rishi's producer character approaches after Zafar backs out, but refuses to take up the role. In a cheeky meta moment, he even tells the producer that the latter is a like a father to him!

During its release, Luck By Chance got good reviews from the critics, but failed to impress the viewers enough to earn a box office hit tag. However, Zoya Akhtar managed to change that with her next - Zindagi Na Milegi Dobara - that was a runaway hit at the box office.

While Luck By Chance never brought Hrithik and Ranbir together on screen, we do hope that some filmmaker would have started looking at that casting option. When Rakesh Roshan himself was asked about casting them together, he had said, " I don't have anything concrete to cast them immediately. For now, even the plans of Krrish 4 are on hold. Let COVID get over and then we shall see." What about casting Ranbir as a supervillain, Mr Roshan, in Krrish 4? Won't that be a tantalising idea?

(The above story first appeared on LatestLY on May 03, 2021 02:49 PM IST. For more news and updates on politics, world, sports, entertainment and lifestyle, log on to our website latestly.com).