Rakul Preet Singh on Her Upcoming Movies: I Am Really Hoping That Things Get Back to Being Normal as Soon as Possible

In the months ahead, Rakul Preet will be in movies such as Indian 2, Ayalaan, Attack, Mayday, Thank God, and Doctor G, among others. 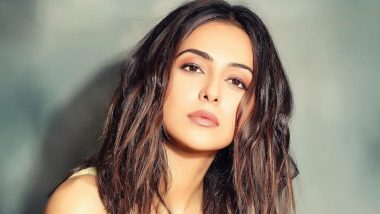 Celebrating her birthday on Sunday and the imminent re-opening of movie theatres in Maharashtra, Bollywood's biggest market, on October 22, Rakul Preet Singh said that it was about time people got back to a normal working life. The actress, who has major films lined up for theatrical release, threw a massive birthday party here, where celebrities such as Riteish Deshmukh, Ayushmann Khurrana, Sidharth Malhotra, Sophie Choudry, and Saqib Saleem, among many others, showed up to wish her the best. The day was doubly special because both Rakul Preet and Jackky Bhagnani announced on social media that they were in a relationship. Rakul Preet Singh Birthday: 8 Bikini Pics of the Hottie That Prove She’s a Water Baby!

Speaking to the media on the sidelines of her birthday, Rakul Preet said: "So many films are ready and we all are waiting for almost a year to release them, so I am really hoping that things get back to being normal as soon as possible and people should start earning their livelihood all over again." On the year ahead, she said: "I had a fun birthday because it was a working birthday. I have lined-up quite a few releases next year. I have complete 6-7 movies, so I am really excited about the next year and hope it will be as beautiful as ever." Rakul Preet Singh Birthday: Sidharth Malhotra, Bhumi Pednekar and Others Extend Lovely Wishes to the Aiyaary Actress As She Turns 31!

When asked when one has 6-7 films releasing back-to-back, does it add to one's responsibilities, Rakul Preet said: "Yes, the responsibility does increase along with the anxiety, as the films are ready and the people will soon start watching them. They should like the films, so it also heightens expectations, but I think, I am in the phase of being just grateful, as I am getting a chance to so many films and I hope that I keep getting such films and they keep on releasing."

With life returning back to normal, Rakul Preet said it was a good sign, but people could not afford to be careless. She said: "I think it is a positive sign, but it doesn't mean we can go around mask-free. We need to follow Covid-19 protocols and defeat this virus." In the months ahead, Rakul Preet will be in movies such as Indian 2, Ayalaan, Attack, Mayday, Thank God, and Doctor G, among others.

(The above story first appeared on LatestLY on Oct 11, 2021 08:42 PM IST. For more news and updates on politics, world, sports, entertainment and lifestyle, log on to our website latestly.com).