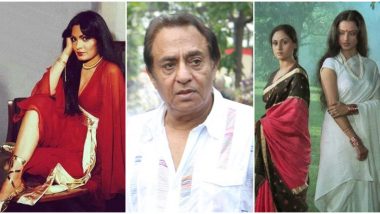 On one fine episode of Koffee With Karan, Kangana Ranaut jokingly cast Karan Johar 'flagbearer of nepotism' for her hypothetical biopic, and the world has not been the same. Bollywood, fans and the media have not stopped talking about nepotism ever since. Sushant Singh Rajput's death triggered more debates. But, it is is not like nepotism is a concept exclusive to the 21st century Bollywood. Even back in the days, the industry repeatedly cast favourites. Bollywood's favourite villain Ranjeet reveals so. Ranjeet Says He Was Thrown Out of His House When He Played Villain for the First Time in Sharmilee.

In a new interview with indianexpress, yesteryear actor Ranjeet was asked if nepotism existed in his time as well. "Nepotism was always there, so was the rivalry," the 77-year-old actor replied

He added, "I remember Parveen Babi was supposed to star in Silsila, but the producer thought Jaya Bachchan would look better. I remember Danny was offered Sholay, but because he was busy, I was offered the role, but I refused because he was my good friend. Eventually, the role went to someone else. So, such things happen. I was in no group, but I had a good bond. I earned love and affection from everyone." Richa Chadha Calls Out the Nepotism Debates, the Fake Condolers of Sushant Singh Rajput's Demise in a Hard-Hitting Blog Post.

Ranjeet's son also aspires to be an actor. "Beta aayega. He is preparing himself. I don’t interfere with their choices. They are more intelligent than me," he revealed.

But the bygone era was different as well. Ranjeet has said that actor struggled while shooting in high temperatures. They shared vanity vans. And they were like a family. "I have enjoyed my work. After every shoot, actors would chill at my house. Be it Jeetendra, Dharmendra, Vinod Khanna or others, they would hang out at my house, drink, eat, chat, and sometimes even play badminton. In those days, you would find Reena Roy cooking paranthas, Moushumi Chatterjee making fish and so on. Even on the sets, actors would discuss their scenes together. Back then, writers were equally important, which I miss in today’s time, to be honest," he said.

(The above story first appeared on LatestLY on Jul 19, 2020 09:59 PM IST. For more news and updates on politics, world, sports, entertainment and lifestyle, log on to our website latestly.com).