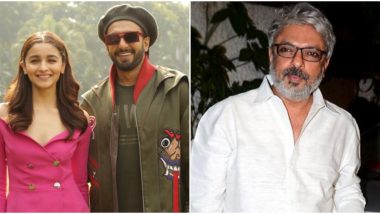 Ranveer Singh and Alia Bhatt's fresh pairing in Zoya Akhtar's Gully Boy was hugely praised and their on-screen chemistry was delightful. The audiences would be in for a treat if the duo decides to collaborate once again for one of their upcoming projects in future. And guess, the wait won't be that long. As per a new report in Bollywood Hungama, the talks to have Ranveer and Alia on board together are already going on and the project in question here is Sanjay Leela Bhansali's next, Baiju Bawra. Gangubai Kathiawadi: Check Out Ranveer Singh, Deepika Padukone’s Reaction to Alia Bhatt’s Look.

It was during Diwali last year when Bhansali's production house announced the filmmaker's upcoming slate with Gangubai Kathiawadi and Baiju Bawra. While the shooting of the former with Alia Bhatt is already underway, there's no new report on the latter. However, industry insiders are insisting that the Simmba actor is all set to work with Bhansali once again in Baiju Bawra. And if all goes well, Alia may join the duo. The story revolves around Baiju Bawra and Tansen's musical face-off in Mughal Emperor Akbar's court. Gangubai Kathiawadi: Netizens Term Alia Bhatt's Powerful Looks as 'Another Milestone Moment'.

Ranveer has previously worked with the director in Ram Leela, Bajirao Mastani and Padmaavat while Alia is currently shooting Gangubai Kathiawadi with him. She was earlier supposed to collaborate with Salman Khan for director's Inshallah. However, the project got shelved due to unknown reasons.

(The above story first appeared on LatestLY on Mar 24, 2020 10:37 AM IST. For more news and updates on politics, world, sports, entertainment and lifestyle, log on to our website latestly.com).