Ranveer Singh: As a Creative Person, I Would Like to Believe That I Have No Limits

Bollywood star Ranveer Singh, who was most recently seen in cricket drama 83, refuses to be put in a box creatively. 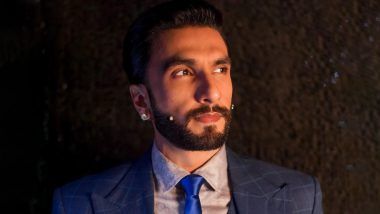 Bollywood star Ranveer Singh, who was most recently seen in cricket drama 83, refuses to be put in a box creatively. The Bajirao Mastani actor likes to be limitless and explore his craft in his constant pursuit for artistic excellence. Ranveer reveals, "My constant endeavour is such that you cannot put me in a box. You can't define me. I don't wish to be defined because I feel defining something by its fundamental nature would be limiting me. As a creative person I would like to believe that I have no limits. That I the possibilities within my craft are limitless, that they be infinite." Ranveer Singh Opens Up About Playing Challenging Roles in His Career So Far.

The actor adds that there's no end to how many characters he could play for the screen, "There is no end to how much I can explore and how many different people I can become. I hope I continue that and if I keep doing the same thing, then I am stagnating. I should probably take a sabbatical, gather more life experiences, put more different characters into my jholi and then come back to work." From Ranveer Singh’s 83 to Salman Khan’s Tubelight, Seven Rs 100 Crore Grossers That Are Still Considered Box Office Disap.

(The above story first appeared on LatestLY on Jan 18, 2022 11:31 PM IST. For more news and updates on politics, world, sports, entertainment and lifestyle, log on to our website latestly.com).