Ranveer Singh's Performance At An Acting Institute Proves He Was Born To be An Actor! (Watch Throwback Video) 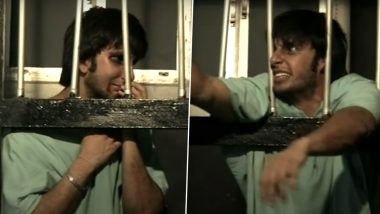 It is Ranveer Singh's birthday today and social media is abuzz with the wishes for him. The actor started out with Band Baaja Baarat and since then, there is no stopping. He has amazed the audience with his versatile roles and convincing performances. However, he was always born to be an actor and these films are only like the tip of the ice berg. This old video when he performed at KNK acting institute is the proof. 7 Years of Lootera: Ranveer Singh Celebrates the Magical Love-story of 'Pakhi and Varun' (Watch Videos).

In this video, we can see the 35-year-old star enacting a jail scene. He is seen as a frustrated and under-confident inmate who struggles to survive in that confined space. He showcases his brilliant acting skills once again and that he is capable to pull off a scene effortlessly in one take. Check it out below!

The fans of course are convinced with the depth of acting and that's why they are looking forward to his next. He will be seen in 83', a film based on India's cricket world cup win in 1983. Ranveer will step into the shoes of then captain, Kapil Dev. His look was hailed by everyone and now the teaser and trailer are much awaited.

(The above story first appeared on LatestLY on Jul 06, 2020 01:58 PM IST. For more news and updates on politics, world, sports, entertainment and lifestyle, log on to our website latestly.com).