Saroj Khan trusted Remo Dsouza to make a biopic on her and now the choreographer-director is looking to get it done with the help of her daughter. 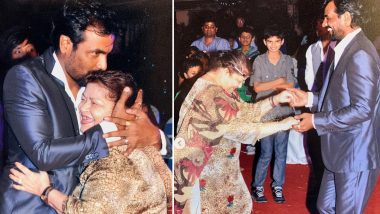 Saroj Khan too left us bereaved this year. We were anyway reeling under the sad demises of the likes of Irrfan Khan, Rishi Kapoor and others with a huge shocker in the form of Sushant Singh Rajput. Her demise saddened us further. Before her ailments took her away from us, Saroj Khan was in talks with Remo Dsouza to make a biopic on her. As per a Mid-Day report, initially, she wasn't too keen as many had approached her for the same. She would say,'Mere baare mein kya jaanna hai logon ko?' But it seems Dsouza was too close for her to trust him with her story. Saroj Khan Death: Late Bollywood Choreographer’s Family Releases Statement Saying ‘Due to COVID-19 Situation There Will Be No Prayer Meet’

Sukaina Khan told Mid-day, "However, during her last days, she had said Remo Dsouza was keen on telling her story. She thought Remo, being a dancer himself, would understand her journey, and hence, was the perfect person to helm the project." That kind of faith can make anyone feel inspired and determined. The Race 3 director also revealed that he did speak to her about the same when they were working together on Tabaah ho gaye for Kalank. "In response, she had said, 'You should make it.' I promised her that I would visit her to gather information about her childhood and early days. But, I didn't pursue it then as I was busy with my film."

So what happens to it now? Remo assures in the report that he will take it forward after discussing with Saroj Khan's daughter. The late choreographer has seen a lot of upheavals to reach where she was and that's a story we all should know about.

(The above story first appeared on LatestLY on Jul 07, 2020 01:12 PM IST. For more news and updates on politics, world, sports, entertainment and lifestyle, log on to our website latestly.com).