Shah Rukh Khan's Next With Rajkumar Hirani To Be an Immigration Themed Social Comedy, Actor Growing His Hair For The Same? 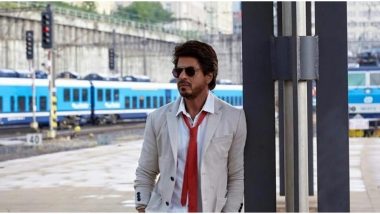 Shah Rukh Khan has been MIA for a very, very long time. The superstar has been teasing the fans about this but hasn't yet announced anything on it. The rumours of his collaborations with top notch directors have been floating around for a while, one of them being Rajkumar Hirani. Now, the latest development on the same is being heard. As per a recent report, this one will be a social comedy based on the immigration topic, set in Punjab and Canada. 28 Years and Counting: Shah Rukh Khan Reflects on His Bollywood Journey Saying 'Thank U All For Allowing Me to Entertain You'.

Mumbai Mirror published a report claiming the same and also citing the reason behind why he is growing his hair right now. A source revealed, "Like all Raju films, it revolves around a serious, globally relevant issue and is treated with gentle humour. The story moves between Punjab and Canada. This guy is jovial, he’ll make you laugh and get emotional. Shah Rukh is growing his hair for the part."

Well, if this turns out to be true, nothing like it! Shah Rukh Khan has had upper hand on genres like comedy and emotional. It will be fun to see him in that mode once again, that is, after a sabbatical of two whopping years. SRK was last seen in Aanand L Rai directed , Zero along with Katrina Kaif and Anushka Sharma. The makers of his next are apparently waiting for the pandemic to end before starting their shoot.

(The above story first appeared on LatestLY on Jul 07, 2020 11:35 AM IST. For more news and updates on politics, world, sports, entertainment and lifestyle, log on to our website latestly.com).