Now, if this happens to be true, Shahid Kapoor fans will surely be in for a treat, considering his amazing acting in the Ranveer Singh-Deepika Padukone starrer Padmaavat. 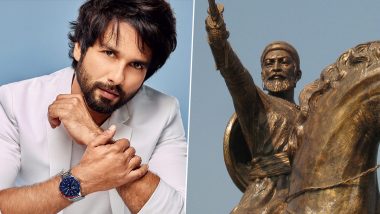 Shahid Kapoor is on a roll currently. After giving a power-packed performance in Kabir Singh, he immediately shifted his focus on the Hindi remake of Jersey. The actor extensively prepped for his role in the film and was shooting for the flick for most of the previous year. Soon after wrapping up the shoot for this film, he shifted his focus on his web debut. He is currently shooting for Raj and DK's web series in Goa. But while the actor is still busy with the project, it seems like he has been offered another role too. Shahid Kapoor Promotes Beard Oil, And We’re Tempted To Send Him Virat Kohli’s Blissed Out Pic!

According to reports in Bollywood Hungama, Shahid has been offered to essay the role of the magnanimous Chhatrapati Shivaji on the big screen. A source close to the development told the news portal, "Ashwin Varde has joined hands with Lyca Productions who are soon going to make their foray in Bollywood in a big way. They are discussing multiple co-production ventures with producers and one of them is a mammoth period saga based on the life and triumphs of Chhatrapati Shivaji."

"Ashwin has approached Shahid Kapoor to star in the film. Shahid has loved the idea and if he says yes, this will be his second period saga after Padmaavat but unlike the Sanjay Leela Bhansali film, he will play the titular role in this one. Shahid and Ashwin have worked together on Kabir Singh previously and they are now locking modalities before they sign the contract," added the source. Now, if this happens to be true, Shahid Kapoor fans will surely be in for a treat, considering his amazing acting in the Ranveer Singh-Deepika Padukone starrer Padmaavat.

Interestingly, this is not the first attempt to make a film on Chatrapati Shivaji. We may have seen many actors play the role of the ruler in different films but a full-fledged film has never happened before. Earlier, Riteish Deshmukh had also decided to bankroll a multi-lingual, pan-India film on Shivaji. The film will see him in the lead role as well. Rumours had it that Ali Abbas Zafar is also eager to mount a film with Salman Khan as Shivaji. Nani's Jersey Director Gowtam Tinnanuri Will Direct Shahid Kapoor in the Film's Hindi Remake?

Talking about his other projects, Shahid will next be seen in Jersey, a remake of the Telugu film of the same name. The 39-year-old star will be seen essaying the role of a cricket player in the movie. Jersey also features actors Mrunal Thakur and Pankaj Kapur, among others in key roles. He will team up with Madras Cafe actress Raashi Khanna for Raj and Dk's show. The film will release on November 5. He also has Shashank Khaitaan's Yoddha in his kitty.

(The above story first appeared on LatestLY on Feb 26, 2021 05:50 PM IST. For more news and updates on politics, world, sports, entertainment and lifestyle, log on to our website latestly.com).