Bhuj: The Pride of India, which is a multi-starrer featuring Parineeti Chopra with Sonakshi. Rumours of a cold war between them have already started spreading. 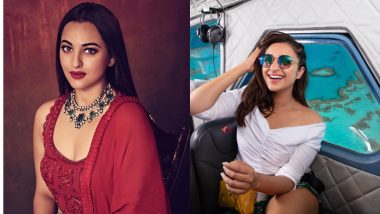 Sonakshi Sinha has one of the greatest line ups an actress could have in 2018. She is currently on a promotional spree for the Dharma Productions' film, Kalank, which will be followed by movies like Mission Mangal, an untitled film with Badshah, and Dabangg 3. Next year for her will begin with Bhuj: The Pride of India, which is a multi-starrer featuring Parineeti Chopra with Sonakshi. Rumours of a cold war between them have already started spreading. An entertainment portal wrote how they were not getting along on the sets of the said film. Funny thing, the shooting for the film has not even started. Alia Bhatt Reacts to Her Weird Skeletal ‘Hand’ Scene From Kalank Trailer; Reveals The Error Won’t Be There in the Movie.

When asked about the rumour, Sonakshi made the revelation. "Yes, I would like to say that there are rumours at the shoot of Bhuj, but the shoot of Bhuj has not started yet. The bigger rumour is that the shoot has started. The shoot won't start till June," she said, chuckling, during a media interaction.

There seem to be zero chances of any cold-wars between the two actresses when the shoot of Bhuj actually commences. Sonakshi is also sharing the screen space with two heroines in Kalank and there was no cold war. Madhuri Dixit Has a Dream Cast Ready For Hum Aapke Hai Koun Remake But We Beg to Differ!

In fact, Sonakshi also talked about how secure she was about her presence in the Abhishek Varman directed film. Talking about the comparison of her role with that of Madhuri Dixit and Alia Bhatt, she said, "The comparisons will not be there as each one's role is so different from the other,"

"You know if an actor thought of all these things before doing a film, then multi-starrers will never be made only. All these things about insecurity, and how big is your role...If George Clooney had asked Brad Pitt how his role bigger then Ocean's 11, 12, 13 would not have been made. Kareena only entered in Kabhi Khushi Kabhie Gham after the interval," she said.

"All these things are trivial when you see the bigger picture. For me, my role was fantastic. It was the character of a strong woman who holds the family together and has a part to play in taking the narrative forward. Every character is well-written and contributes to the story," she added, talking about the role in Kalank.

Kalank, produced by Karan Johar, stars Sanjay Dutt, Varun Dhawan and Aditya Roy Kapur in the lead roles alongside the actresses. The movie is set for a release on April 17, 2019.

(The above story first appeared on LatestLY on Apr 08, 2019 06:53 PM IST. For more news and updates on politics, world, sports, entertainment and lifestyle, log on to our website latestly.com).