Squid Game: Indian Fans Are Comparing Korean Netflix Series With Luck; Did You Know The Imran Khan Film is Also a Remake?

Squid Game, Netflix's new Korean series, has taken the world by storm. The bloody elimination game in the series has appeased many viewers. Indian fans on the other hand, found it to be highly similar to Luck and rightfully so. Only glitch is Luck isn't an original story entirely. 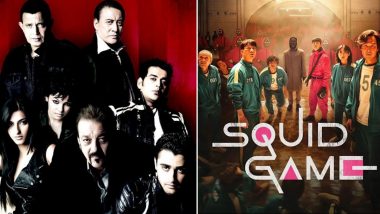 Indian fans can't believe their 'Luck'. What are the odds that they found similarities between Netflix's wildly popular Korean series Squid Game and Bollywood movie Luck? The latter starred Imran Khan, Shruthi Haasan, Mithun Chakraborty, Danny Denzongpa and more. The film had released in 2009 and talked about a set of out of luck people who are brought together by an evil man to win a deadly game and become rich. It's the game of elimination. See the similarities there? Of course, the resemblance is uncanny but before you pride over the fact that Bollywood did it first, let us tell you some thing. Luck is loosely based on a Hollywood movie called Condemned that released in 2007. Well, Bollywood always gets 'inspired'. Not Only ‘Squid Game,’ but ‘Hometown Cha-Cha-Cha’ Goes Global Hit

Condemned talks about a man who is waiting for his death sentence as a condemned killer, is bought by a television producer and is sent to an island to fight it out with more like him for freedom. AR Rahman Opens Up About Creating Music for Netflix’s House of Secrets, Says ‘Glad to Have Worked on Such a Project’

Squid Game has taken the digital entertainment world by storm. This eliminating game much like Hunger Games has satiated many web-series watcher.

(The above story first appeared on LatestLY on Oct 04, 2021 04:13 PM IST. For more news and updates on politics, world, sports, entertainment and lifestyle, log on to our website latestly.com).