Sridevi to be Honoured Posthumously at 71st Cannes Film Festival 2018

Bollywood actress Sridevi will be honoured at the 71st Cannes Film Festival 2018 posthumously. 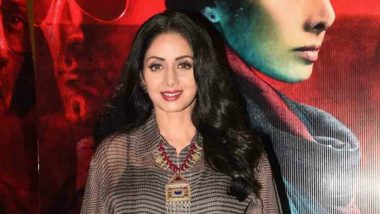 Bollywood actress Sridevi will be honoured at the 71st Cannes Film Festival 2018 posthumously. The Titan Reginald F Lewis Film Awards held at Cannes, will celebrate women of the film industry all over the world and also salute its multicultural impact on Wednesday (May 16), reports DNA. the late actress will be honoured with Titan RFL Icon Award. During the event, memories and visual footage of her best performances will also be shown in the presence of filmmakers from across the world. The report further states that the event is being organised keeping in mind the curiosity around the actress as a symbol of achievement and inspiration for entertainers, diversity in action and women throughout the world.

The actress won her first National award posthumously at the 65th National awards that happened this year. Boney Kapoor, Khushi and Janhvi were present to attend the award ceremony as the late actress was awarded Best Actress Posthumous award for her performance in MOM.

Janhvi Kapoor, Khushi and Boney have been holding up really strong ever Sridevi's sudden demise. The actress, who died due to accidental drowning in Dubai on February 24, 2018, Saturday has left a void in the heart of every movie buff.

According to the forensic report, the 54-year-old Indian actress died of accidental drowning in her hotel room's bathtub, after suffering a dizzying spell. According to reports, traces of alcohol were found in her body too.

(The above story first appeared on LatestLY on May 13, 2018 10:08 AM IST. For more news and updates on politics, world, sports, entertainment and lifestyle, log on to our website latestly.com).