Tomorrow it is Sushant Singh Rajput's birth anniversary and fans are remembering the late actor by posting ‘One Day For SSR Birthday’ on Twitter. 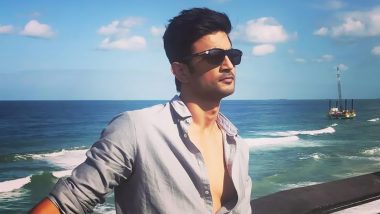 Fans of Sushant Singh Rajput are still not able to get over the fact that the actor is no more. His demise left everyone shocked. The actor was found dead, hanging from the ceiling fan, in his Bandra apartment on June 14, 2020, and since then from family members to fans to industry friends, all have been demanding justice for him. Tomorrow, January 21, it is birth anniversary, and fans are remembering the actor and how wonderful it would have been had SSR was here with everyone. Chanda Mama Door Ke: Sushant Singh Rajput’s 2017 Announced Space Film to Be Revived as a Tribute to the Actor.

Fans are mentioning ‘One Day For SSR Birthday’ and trending it on Twitter. From sharing his cheerful moments (both onscreen and off screen), to stills of him from his films, mentioning how humble he was in real life, his contributions in the world of cinema, and much more. Fans remember this talented soul and one just cannot deny the fact that there cannot be any other actor who can replace him and his works. Let’s take a look at some of the posts shared by fans on Twitter.

You:Are u really excited for 21st?

Me:🥺No..Rather than excitement my heart is getting heavier..

It wont be a celebration without bday boy...missing you horribly @itsSSR🦋💫♥️♥️

ONE DAY FOR SSR BIRTHDAY pic.twitter.com/uVfhL4M3jA

Thank you Sushant भाई for being the reason of this massive transformation and sudden awareness amongst the people of INDIA 🇮🇳 and the globe. You will get justice for sure भाई । SSRians will never let you down.

ONE DAY FOR SSR BIRTHDAY pic.twitter.com/7pZZI2Ngme

One Of The Most Loved Actors

Actions speak louder than words! And Sushant you proved that in many ways. We all love you & Super proud of you.. ONE DAY FOR SSR BIRTHDAY. @itsSSR @nilotpalm3 pic.twitter.com/twcsDJIjax

The name which will be remembered till eternity!!

ONE DAY FOR SSR BIRTHDAY pic.twitter.com/YRHodKjtMc

He Was A Charming Man

Only Sush can look so dashing, hot, innocent, elegant all at same time! 😌❤@itsSSR 😍😍

ONE DAY FOR SSR BIRTHDAY pic.twitter.com/31z1SFjWhv

Such a Deep thinker, Positive, Energetic, Exemplary, Intelligent person- Sushant Singh Rajput. Guys.. Gear up. We are going to make it huge.. ONE DAY FOR SSR BIRTHDAY @nilotpalm3 pic.twitter.com/X0Gi94ucpM

It was just a few days ago when Sushant Singh Rajput’s sister Shweta Singh Kirti had shared a post on Twitter asking all fans, “How should we celebrate Bhai’s birthday, it is on 21st Jan... Any Suggestions... #SushantBirthdayCelebration.” In another post she wrote, “How about selflessly helping 3 people on Sushant’s Birthday and Praying for his Soul. We can even have 15 mins Global Meditation Session organized on his Birthday. #SushantBithdayCelebration.” Shweta also mentioned, “And I would love to see more people performing on his songs and posting it on social media. Let’s celebrate his life and help spread love and joy. #SushantBirthdayCelebration”. We are sure, fans of Sushant Singh Rajput would make his birth anniversary a memorable one.

(The above story first appeared on LatestLY on Jan 20, 2021 11:12 AM IST. For more news and updates on politics, world, sports, entertainment and lifestyle, log on to our website latestly.com).