Takht: Karan Johar's Magnum Opus with Kareena Kapoor Khan, Alia Bhatt, Ranveer Singh and Others to be Mounted on a Lavish Budget of Rs 250 Crore?

The budget of Karan Johar's magnum opus to go beyond Alia Bhatt and Ranbir Kapoor's Brahmastra. 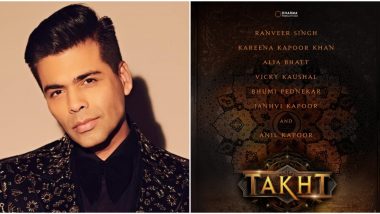 Karan Johar returns to the director's chair after a gap of three long years, his last directorial being Ranbir Kapoor, Anushka Sharma and Aishwarya Rai Bachchan's Ae Dil Hai Mushkil. This time, however, the filmmaker is stepping out of his comfort zone and venturing into historical cinemas, a genre that's usually associated with Sanjay Leela Bhansali or even Ashutosh Gowariker. Titled Takht, the movie has a stellar star cast of Kareena Kapoor Khan, Ranveer Singh, Janhvi Kapoor, Alia Bhatt, Vicky Kaushal, Bhumi Pednekar and Anil Kapoor. And while we expected its budget to be humongous, we didn't expect a figure as big as Rs 250 crore! Takht: Ranveer Singh, Kareena Kapoor Khan, Vicky Kaushal to Start Shooting for the Period Drama from This Date.

As per reports in Bollywood Hungama, the filmmaker is planning to mount his dream project on a huge budget and is leaving no stone unturned. While films like Kabhi Khushi Kabhie Gham and Agneepath were touted as the costliest to come out of Dharma productions, Takht will easily beat them in this department. "Every star Anil Kapoor, Kareena Kapoor Khan, Ranveer Singh, Alia Bhatt, Bhumi Pednkar and Vicky Kaushal, is being paid his or her market price. They’d have happily taken a cut for Karan’s sake. But Karan insisted on paying them their market price," a source was quoted saying by the portal.

For the ones who are wondering if Takht would be costlier than Ayan Mukherji's Brahmastra then the answer is yes. "Karan was insistent that Ayan announces the release date of the long-delayed Brahmastra before shooting Takht. The release date for Brahmastra is now out (4 December 2020) and Karan starts shooting Takht in March 2020.” Rangoli Chandel Takes a Sly Dig at Karan Johar’s Takht Says, ‘He Will Depict Aurangzeb Cruelty Through His Abs and Sexual Relationships’.

The film is set in the Mughal era where Anil Kapoor plays Shah Jahaan while Ranveer is his elder son, Dara Shikoh and Vicky Kaushal is Aurangzeb. The film is slated to hit the screens on Christmas 2021.

(The above story first appeared on LatestLY on Feb 12, 2020 04:01 PM IST. For more news and updates on politics, world, sports, entertainment and lifestyle, log on to our website latestly.com).