Well, just so you know, there are also some netizens who are just aren't ready to buy that a 'harmless slap' in the 'heat of the moment' is also equivalent to domestic violence and physical assault. 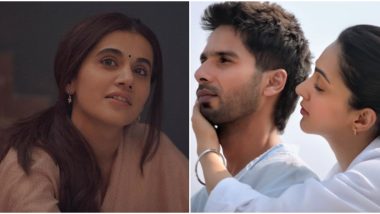 Anubhav Sinha is back with his new filmy outing, which is, Taapsee Pannu starrer Thappad. The trailer gives us a fine glimpse of the director's take on physical abuse. It is not just about the person who is responsible for it but also the society's casual attitude towards it. As the trailer dropped, the fans are totally going gaga over the plot and the performances of the actors. In fact, they are also mercilessly trolling the makers of Kabir Singh including Shahid Kapoor and Kiara Advani. Thappad Trailer: Taapsee Pannu's Film Is The Perfect Answer to How Preeti Should Have Reacted to Kabir Singh's 'Just One Slap'.

Thappad shows how Taapsee's character files a petition against her husband who slaps her in the heat of the moment. While the family and society mock her for taking it 'too far' for 'just one slap', she takes a bold stand that even a single slap makes you guilty of domestic violence and it is NOT OKAY. The fans were soon reminded of the scene in Kabir Singh where Shahid Kapoor's Kabir Singh hits Kiara Advani's Preeti!

Director Sandeep Reddy Vanga too had justified the scene saying, "if you don't have the liberty of slapping each other, then I don't see anything there. If you can't slap, if you can't touch your woman wherever you want, you can't kiss, you can't use cuss words, I don't see any emotion in that." Well, this has now trickled down on Twitter through memes and tweets, Check them out below.

#ThappadTrailer is one tight slap across the faces of all those who are trying to normalise domestic violence by claiming that it also show of love. Hats off @anubhavsinha for doing this❤️

However, these rarely happen in public and the real battle is to get people to believe you

Another gem by @anubhavsinha and @taapsee

Time to stop normalising violence in the name of love.

Let this be our anthem.

Tapsee Pannu: My lover slapped me, so I am filing a case against him

The Slap Drama in Kabir Singh

Saw the trailer of @anubhavsinha’s #Thappad and there’s no other way of saying this — it’s a tight slap on Kabir Singh, the Vanga dude-bros and everything they stand for.

Well, just so you know, there are also some netizens who are just aren't ready to buy that a 'harmless slap' in the 'heat of the moment' is also equivalent to domestic violence and physical assault. Well, here's the trailer and we would love to hear your take on the same as well.

(The above story first appeared on LatestLY on Jan 31, 2020 02:59 PM IST. For more news and updates on politics, world, sports, entertainment and lifestyle, log on to our website latestly.com).