Tiger Shroff's Song Unbelievable Out! the Actor's Voice Is as Smooth as His Dance Moves (Watch Video) 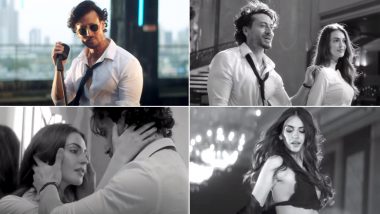 Tiger Shroff has joined the growing list of actors who also sing in Bollywood. Alia Bhatt, Shraddha Kapoor, Parineeti Chopra, Ayushmann Khurrana have already earned fans with their singing skills. Salman Khan released multiple songs over the past few years exploring his hobby to sing. Now, Tiger has released a new single titled Unbelievable. Tiger's voice in the jazzy number sounds as smooth as his dance moves. We would also like to point out the heavy use of autotune, although. Tiger Shroff's Rambo Remake Sees a Big Change, Director Siddharth Anand Steps Down to Make Way for Rohit Dhawan.

Of course, Tiger's fans are loving the song. Within 15 minutes of premiering, the song garnered 19 thousand views and more than 18.5 thousand likes. Umm...ok. The actor also treats the fans with a music video where he shows off his dancing skills. Punit Malhotra (Student of the Year 2) has directed the cool-looking music video. Tiger Shroff: ‘It Takes Double the Effort to Make It on Our Own in the Industry’.

In an Instragam post, Tiger wrote about working on the song. "And just when I thought jumping off one building to another was tough...for me this has been the most challenging yet full-filling experience. Highest respect to musicians all across the globe, so much to learn ... but until then here's presenting our humble effort," he penned.

On the work front, Tiger Shroff was last seen in the action film, Baaghi 3, which did good business before the lockdown was ensued. The actor will soon start shooting for Heropanti 2 and Rambo remake which was announced at Cannes 2018. He has also signed a film about underground mixed martial arts to be directed by Vikas Bahl. It's tentatively titled, Ganpat.

(The above story first appeared on LatestLY on Sep 22, 2020 01:08 PM IST. For more news and updates on politics, world, sports, entertainment and lifestyle, log on to our website latestly.com).