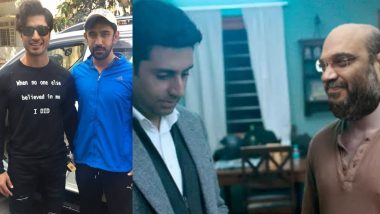 Ladies and gentlemen, here is a tweet that will be enough of the internet for you today. We can't let celebrities make even the tiniest gaffe these days. The latest victims are Commando hero Vidyut Jammwal, who took down Yaara co-star Amit Sadh and Home Minister Amit Sadh with him. Vidyut wanted to thank Sadh for his lovely tweet promoting Khuda Haafiz, but he tagged Shah instead. He wrote, "Thank you @AmitShah ..A tight virtual hug to you,"

And that is all fodder the internet needed for jokes and Memes. Memers have come out with their keyboards blazing. People have literally photoshopped Shah into Sadh's movies and shows like Breathe Into The Shadows, Sarkar. And of course, being a political figure, use of Shah's name has invited a lot of political jokes as well. Check out some hilarious Jokes on the subject matter.

That Is Shah In Sarkar

That Is Shah In Breathe

Here Are Some Political Jokes

Soon, Vidyut realised his mistake. He did not take down the incorrect tweet, but found himself laughing at a few memes. He made another tweet, tagging the correct Amit, this time. Well, at least, Vidyut didn't write the girl gang wrongly like Shahid Kapoor, because that would have been a gaffe, the internet won't ever let him forget.

Thankyou @TheAmitSadh ...A tight virtual hug to YOU😀...I hope it reaches you on the right address 😂 https://t.co/pOocvFHCMa

Amit (Sadh) and Vidyut will star together in Tigmanshu Dhulia's film, Yaara. The movie will drop on Zee5 soon. Amit will also star in the web-series Avrodh, after this year's successful Breathe Into The Shadows. Vidyut's Khuda Haafiz will drop on a streaming platform soon.

(The above story first appeared on LatestLY on Jul 27, 2020 05:58 PM IST. For more news and updates on politics, world, sports, entertainment and lifestyle, log on to our website latestly.com).