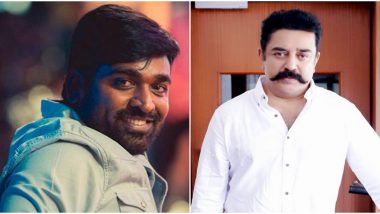 Who would not want to work with Kamal Haasan? Why would any actor reject a humungous project such as Indian 2? But it came as a shock to many movie fanatics and fans of Kamal Haasan, when Vijay Sethupathi revealed that he turned down the offer of Indian 2. An event was held in honour of Haasan to celebrate his completion of 60 years in Indian cinema, #Kamal60, for which many celebs were seen in attendance and even Vijay Sethupathi was a part of it. Indian 2: Kamal Haasan to Speak in Gujarati in the Upcoming Action Thriller?

It was during the event when Vijay Sethupathi stated that he was given an opportunity to work with Kamal Haasan in Indian 2, but he could not accept it due to date issues. On stage Sethupathi requested Haasan to give him a chance to work with him, and looks like his request has been fulfilled. As per a report in a leading daily, Vijay Sethupathi has been roped in to play a negative role in Indian 2. Indian 2: Kamal Haasan Wraps Bhopal Schedule after Shooting Rs 40 Crores Action Sequence, Crew Heads to Gwalior Now.

A source revealed to TOI, “Yes, he has been signed on to play a negative role in the movie and the actor will most likely begin shooting for his portions from mid-February.” But we’ll have to wait to celebrate till the official announcement is made. Indian 2 features an ensemble cast - Siddharth, Kajal Aggarwal, Rakul Preet Singh, Priya Bhavani Shankar and Bobby Simha. Kamal Haasan would be reprising his role as Senapathy in this film, directed by Shankar.

(The above story first appeared on LatestLY on Nov 24, 2019 01:34 PM IST. For more news and updates on politics, world, sports, entertainment and lifestyle, log on to our website latestly.com).