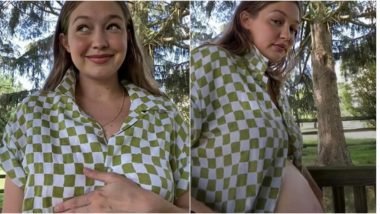 Famed model Gigi Hadid is pregnant with her first child with boyfriend Zayn Malik. Ever since the news first broke, fans have been more than excited about for the couple. Gigi had confirmed her pregnancy on Jimmy Fallon's show and said, "We're excited" as she spoke about Zayn and her reaction after finding out the big news. The supermodel recently indulged in an Instagram live session with her fans and showed her baby bump. Gigi truly seems to be shining in the pregnancy glow and we have to say, she looked beyond gorgeous. Gigi Hadid is Excited to Celebrate her Quarantine Birthday with Zayn Malik at her Family Farm in Pennsylvania.

For the first time, Gigi gave her fans a peek at her stomach in this video. During her interaction with fans, Gigi was spotted saying, "[With] pregnancy, all I want to wear is loose stuff. Everyone's like, 'Oh, you didn't look pregnant in your jumpsuit on your last live.' That's because, this way, this is how I'm normally going to look in this. The reason I said it was a different story is like…" Speaking further about her baby bump, she said, "There's my belly y'all. Like, it's there. From the front it's different."Gigi Hadid Is Pregnant, Expecting First Child With Zayn Malik! Fans Can’t Keep Calm As They Congratulate Power Couple With Funny Memes and Cute Wishes.

“My pregnancy is not the most important thing going on in the world. People have lost lives during coronavirus and still happening, then we moved into the re-emergence of the BLM movement and I thought that our presence on social media should be used for that.” 👏🏻💙 . . . . #gigihadid #zaynmalik #zigi #zayn #gigi

Here's Another Picture of Gigi Hadid:

Gigi also revealed how she has been documenting everything from her pregnancy and that she will be releasing the footage later. Speaking about the same, she said, "I love you all and I really appreciate your positive messages. I'm just taking my time with sharing my pregnancy and you guys will see it when you see it."

Gigi also revealed that she's been keeping to herself for the time being because she didn't feel it's the right time to post about her pregnancy considering the loss of lives due to coronavirus and also the re-emergence of the Black Lives Matter movement. Hadid stated that "I thought that our presence on social media should be used for that."

(The above story first appeared on LatestLY on Jul 16, 2020 08:49 AM IST. For more news and updates on politics, world, sports, entertainment and lifestyle, log on to our website latestly.com).