Angelina Jolie Birthday: From Maleficent to A Mighty Heart - 5 Films Of the American Actress That Are Unmissable

The actress celebrates her birthday on June 4 and as she turns 45, we look at some of her best films. The best part about Jolie's work is that she has managed to shine in each of the projects she starred in. 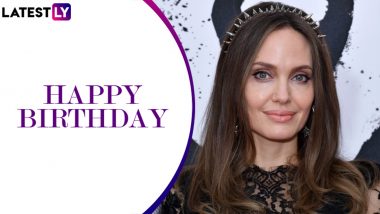 Angelina Jolie is one of the biggest Hollywood stars who is not only known for her brilliant acting prowess but also for being a humanitarian. Jolie has been the recipient of several accolades including an Academy Award and three Golden Globe Awards. Her biggest works include films such as Tomb Raider, A Mighty Heart, Girl Interrupted and more. The actress is known for her versatility and has done everything from and action to romance and has excelled at everything. She's one of those rare actresses who has surprised us every time she took on a role. Not to mention, her unmatched beauty has resulted in her having a massive fan base all over the world. Brad Pitt and Angelina Jolie Become Friendlier As They Battle Out For Kids' Custody?

The actress celebrates her birthday on June 4 and as she turns 45, we look at some of her best films. The best part about Jolie's work is that she has managed to shine in each of the projects she starred in, irrespective of how the film fared eventually critically or at the box office. She has also brilliantly shouldered films like Maleficient that became huge hits. Here's looking at her best works.

If you haven't watched this film yet, you are missing out on something brilliant. With Winona Ryder and Angelina Jolie in lead, this psychological drama is probably one of the best films of the latter's career. She even bagged an Academy Award for best-supporting actress for this role.

This HBO biopic starred Jolie in the role of model Gia Marie Carangi. The film revolved around Carangi' life after she became addicted to heroin and how her modelling career rapidly declined and eventually resulted in her death due to AIDS-related complications at the age of 26.

In this film, Jolie played the wife of the slain wall street journal reporter, Daniel Pearl. The gripping won a lot of praises and Jolie's stellar performance was loved by the audiences.

In this live-action Dinsey drama, Angelina Jolie essayed the role of a villain in the most delicious manner. She is the perfect balance of sinister and sensitive in this film and we have to say a perfect choice for the part.

The action-adventure film based on the Tomb Raider video game series is considered to be one of the best game adaptations. The audiences loved Jolie's performance in the film so much that it showed at the box office too. It was the highest-grossing film on its opening weekend.

Angelina Jolie is a huge star and has till now starred in many films but we have to say,these remain to be our favourites. Do comment and tell us your favourite Jolie films that you'd love to watch on her birthday!

(The above story first appeared on LatestLY on Jun 04, 2020 09:15 AM IST. For more news and updates on politics, world, sports, entertainment and lifestyle, log on to our website latestly.com).