Cate Blanchett on Gender Disparity in Hollywood: Pushing Towards Equality Is Not Just a Fashionable Moment in Time 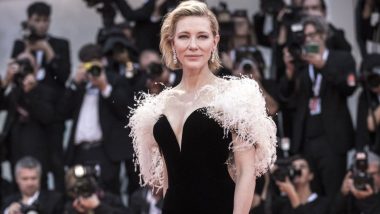 Actress Cate Blanchett feels the 1970s gender issues are still relevant, and says it is important to remember that feminism is not just a "fashionable moment". In an interview to Radio Times, the Oscar-winner, 51, said that the current talking points such as "same-sex marriage" and "same-sex bathrooms" were all discussed 50 years ago, reports dailymail.co.uk. Blanchett said that women have constantly been outnumbered by men in the acting world. "I always knew in my DNA that women were equal to men. I couldn't quite understand why the industry and work environment that I got spat into didn't reflect that, so I felt out of sync for a long time. At one point, I started doing a headcount of the ratio of men to women on every set I walked on," she said. Robert De Niro, Anne Hathaway Board Cate Blanchett Starrer Armageddon Time.

"This show is like Groundhog Day. The discussions that we were having back in 1971 and 1972 are constantly popping up in the media today. Same-sex bathrooms. Same-sex marriage. Will women be drafted into the military? That came up earlier this year with events in Iran. It couldn't be more relevant," she said. "I was inspired by the way the women would speak in the Seventies. There was a strong culture of robust public debate... something we've lost. We've got haranguing matches, but we haven't got a sense of public discourse," added the mother-of-four.

(The above story first appeared on LatestLY on Jun 30, 2020 03:51 PM IST. For more news and updates on politics, world, sports, entertainment and lifestyle, log on to our website latestly.com).