Chris Evans’ Old Pic of Signing on a Bomb for US Air Force Goes Viral Post His ‘F**king Enough’ Reaction to Texas School Shooting – Here’s Why!

The Captain America star was called out for his happy endorsement of US Invasions in Middle East that claimed the lives of millions of kids. 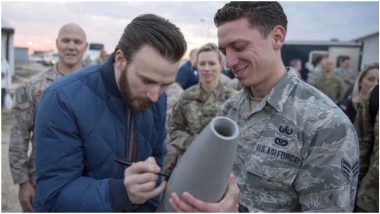 The tragic Texas School shooting where a teenage gunman killed 21 people before he was put down, left the world in shock and elicited angry reactions from Hollywood celebrities. Among them was Chris Evans most known for playing Captain America in MCU, whose "F**king Enough" tweet went viral. However, not all Twitterati shares his anger as some posted an old pic of the actor signing a bomb for the US Air Force, and calling out his double standards that he has no qualms in endorsing weapons that killed so many children in Afghanistan and other Middle East countries where USA carried out raids in the past. Texas School Shooting: Taylor Swift, Chris Evans, Mindy Kaling And Other Celebs Condemn The Killing of Students at Ulvade's Robb Elementary School.

Not 'F**king Enough' When It's for Afghan Kids

“fucking enough” except when it’s kids in afghanistan https://t.co/kDUOgUHrF6 pic.twitter.com/LXS3mF7fc5

No Kid Should Fear For Their Lives

Not to be that bitch but this you? Yeah kids in Amerika shouldn’t have to fear for their lives for just existing but shouldn’t the same be said for children in the Middle East? https://t.co/h5RmSYWRKC pic.twitter.com/wbMd8vx9gr

Chris is OK with murdering kids as long as they are not Americans. https://t.co/0Ukg31og94 pic.twitter.com/15vZHra1Xe

Here is Captain AmeriKKKa, aka, @ChrisEvans, happily signing a bomb.

Chris Evans, like many other morally-bankrupt celebrities, is nothing more than a vicious Neo-Liberal hiding behind a mask - literally. pic.twitter.com/WnaIVDyeh4

You posed with missiles at a U.S. military camp in Afghanistan where this year alone *13,000* newborn babies have died from malnutrition and 95% of the population do not have enough to eat cause Amerika froze $9.5 billion of assets in the Afghan Central Bank. https://t.co/izV8vmVJgT pic.twitter.com/nssAl58BWw

(The above story first appeared on LatestLY on May 26, 2022 02:48 PM IST. For more news and updates on politics, world, sports, entertainment and lifestyle, log on to our website latestly.com).