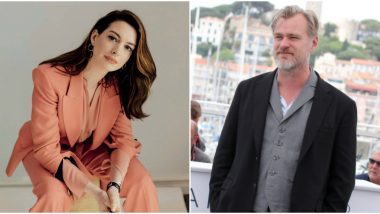 Why would Anne Hathaway suggest there are no chairs on Christopher Nolan's movie sets? Especially after a few journalists and extra actors who have visited his sets and worked in his movies have refuted all the claims. She was probably joking and never thought the conversation would be blown out of proportion. However, after the Dunkirk director received backlash from his industry folks and certain film critics over his weird chair rule, his representative had to react to her claims and deny them obviously. Hugh Jackman and Anne Hathaway Reveal Christopher Nolan Doesn't Allow Chairs or Cellphones on the Sets, Here's Why.

"For the record, the only things banned from [Christopher Nolan’s] sets are cell phones (not always successfully) and smoking (very successfully),” Nolan’s spokesperson Kelly Bush Novak of ID said in a statement to IndieWire. "The chairs Anne was referring to are the directors chairs clustered around the video monitor, allocated on the basis of hierarchy not physical need. Chris chooses not to use his but has never banned chairs from the set. Cast and crew can sit wherever and whenever they need and frequently do," she clarified further.

The debate over Nolan and his chairs started after Variety published an “Actors on Actors” video interview between Anne Hathaway and Hugh Jackman where the actress revealed his weird 'no chairs' policy. "(He) doesn’t allow chairs, and his reasoning is, if you have chairs, people will sit, and if they’re sitting, they’re not working. I mean, he has these incredible movies in terms of scope and ambition and technical prowess and emotion. It always arrives at the end under schedule and under budget. I think he’s onto something with the chair thing," she had said in her interaction. Tenet Gets Delayed Further! Christopher Nolan's Next with John David Washington Will Now Release on August 12, 2020.

Hathaway has previously worked with Nolan in The Dark Knight Rises and Interstellar.

(The above story first appeared on LatestLY on Jul 01, 2020 11:18 AM IST. For more news and updates on politics, world, sports, entertainment and lifestyle, log on to our website latestly.com).