Don’t Breathe 2 is the sequel to the 2016 horror-thriller. It is directed by Rodo Sayagues in his directorial debut, and has Stephen Lang return to the lead role as the Blind Man. Don’t Breathe 2 is releasing in theatres in India on September 17. 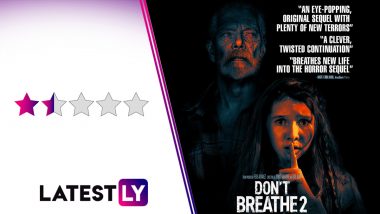 Don’t Breathe 2 Movie Review: While watching Don’t Breathe, there was this feeling of simplicity to it that eventually escalated into something more, and is what made the movie so special. Every minute felt like a fight for survival and is what made that movie so compelling as you watched these bunch of thieves just try to make it alive. It ended on a good point and was left just open enough to interpret your own ending, so why did this film need a sequel? Don’t Breathe 2: Stephen Lang’s Thriller To Release in India on September 17!

Don’t Breathe 2 again stars Stephen Lang as The Blind Man and this time around he is joined by new cast member Madelyn Grace, who portrays the role of his daughter Phoenix. Their relationship is the crux of the film and is what moves the plot forward. Everything is merry until a group of goons decide to break into the Blind Man’s house and so starts our story. Sounds simple enough right? Well it isn’t.

Before I get into the classic blunders of how sequels tend to be ‘BIGGER AND BETTER’, I do really commend Stephen Lang on his acting. He portrays the Blind Man really well and again remains the best part about the film. He is scary, he is threatening and is just a great presence on screen. Also the first act? Yep that’s what I wanted Don’t Breathe 2 to be. It had that house invasion vibe to it and featured a really impressive tracking shot which did elevate the tension. Honestly, it felt like an A rated version of Home Alone.  It retained the simplicity of the first film and was genuinely enjoyable, and then it just went down like a rollercoaster after reaching its peak.

All the simplicity is thrown out right away as the film tries to up its plot by introducing elements that lose sight of what made this concept so special. It’s a convolution of plot points that don’t belong here and make the film seem like a completely different entity than what its first act set it up to be.

The stark tonal shift as it keeps turning more grungy is felt as The Blind Man goes on racking up kills with no meaning behind them. There is so much gore and blood over here that after a while I just became numb to it. The first couple of times I squinted, but after that it became so much that I just felt no emotion towards it. Don’t Breathe 2 Review: Stephen Lang’s Horror Sequel Is Dull and Unwanted, Say Critics.

The second half is a bag full of missed opportunities and inconsistent writing that after watching the suspenseful first film, the second one feels like watching your favorite pub burn down. I couldn’t care much about the villain, or the daughter, or whatever that was going on in the second half just because of how conceptually different it felt from the first half. This in turn leads to the pacing also hitting a huge halt which breaks the flow.

Now I have one more complaint that might spoil the first Don’t Breathe a bit. I have a huge issue here with them trying to make The Blind Man sympathetic considering his character is a rapist. I just can’t sympathise with him knowing what he did in the first film and that massively bugged me. While it is made clear that he regrets his actions throughout the film, it’s just not something that you can overlook and be fine with.

- Stephen Lang as The Blind Man

- Hard to Sympathise With Protagonist

“Now you will see what I see” says The Blind Man before killing a man, I really wished he would have said that to me at the start of the second act, because I too hope that I went blind before it started. If you’re a person who likes watching something they like fall face first into a pile of cement, Don't Breathe 2 is the movie for you.

(The above story first appeared on LatestLY on Sep 17, 2021 11:01 AM IST. For more news and updates on politics, world, sports, entertainment and lifestyle, log on to our website latestly.com).