Jurassic World Dominion features an ending that feels like it puts a rest to the saga once and for all, even though that ending fails to live up to the hype. It ends on a rather very safe note where all our characters are right where they need to be 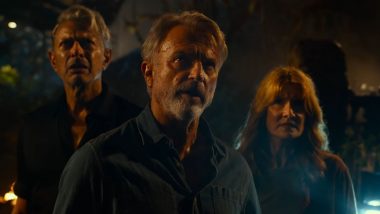 Jurassic World Dominion is playing worldwide now and so closes the book of the Jurassic Park saga. Being the sixth and the final Jurassic Park film, it’s directed by Colin Trevorrow and sees the return of the original trio of Alan Grant (Sam Neill), Ian Malcolm (Jeff Goldblum) and Ellie Sattler (Laura Dern), while the mainline Jurassic World cast of Owen Grady (Chris Pratt) and Claire Dearing (Bryce Dallas Howard) are here too. Seeing the dinosaurs free to roam the world now, the final film saw the humans try and adapt to them while a new evil company is on the rise. Jurassic World Dominion Movie Review: Chris Pratt and Sam Neill’s Finale is a T-Rex Sized Disappointment With Quite the Convoluted Plot (LatestLY Exclusive).

Warning: Spoilers for Jurassic World Dominion Will Be Mentioned from This Point

Jurassic World Dominion features an ending that feels like it puts a rest to the saga once and for all, even though that ending fails to live up to the hype. It ends on a rather very safe note where all our characters are right where they need to be, and the dinosaurs are going to keep roaming around the Earth for as long as possible. So, let’s explore the ending to Jurassic World Dominion and see what takes place there. Jurassic World Dominion Review: Chris Pratt, Laura Dern’s Film Receives Negative Response From Critics.

After the group is able to restore the power to ADS and Owen rescues Blue’s baby Beta, they plan on getting out of Biosyn labs with a helicopter. Kayla (Dewanda Wise) makes sure that the chopper will be ready to make an escape for it and lands in the center of the Biosyn property. With the dinosaurs out and about roaming, the T-Rex makes an appearance out of nowhere and startles the group.

It’s revealed that the T-Rex isn’t there for them, rather to fight off against the Giganotosaurus. Rexy and Giga get into a fight then while the group tries their best to get into the helicopter. They are able to do so and take off. Giganotosaurus is easily able to get an upper hand on the T-Rex and incapacitates him.

Quickly, Giga’s attention is then shifted towards Therizinosaurus who scratches the dino off with its huge sharp nails. The T-Rex then wakes up and pushes off Giga into Therizinosaurus’ nails, which ends up stabbing and kills him.

Our group makes it back to the land and Alan, Ellie and Ian speak out against Biosyn’s crimes as they have a sample of the locust DNA. Dr Henry Wu redeems himself by bio-engineering a locust that takes away an entire group from the farms effectively saving all the crops.

Owen, Claire and Maisie are able to reunite Blue with her child. Blue and Owen share one last look at each other and go their separate ways. It’s also revealed that the Biosyn property is now a safe haven for the dinosaurs too. We are then treated to a montage of Dinosaurs co-existing among other animals and humans with the film finally ending and putting a close on the saga.

What Does this Mean for the Franchise?

Well, it looks like Jurassic World Dominion does put a close on the franchise, at least for now. That’s until some next in-universe mogul decides to capitalise on them. But no, this is it for the franchise it seems.

Ellie and Dr Grant are finally together, romantically involved, and it looks like their stories are capped off. Owen and Blue finally bid each other goodbye as they both start a family of their own. Every character is given their due farewell and the ending does treat itself like the closing of a saga.

With the dinosaurs living among humans and adapting to them, it surely does look like the world will adapt too and everything will work out in the end.

Can We Expect Any Future Films?

Spinoffs? Maybe. The film does set up an illegal dino trade going on in the world and a bunch of other stuff. At the centre of it you have Dewanda Wise’s Kayla as well. Maybe a film revolving around her? Only time will tell.

Of course, this is Hollywood and the Jurassic Park franchise is a money-maker. A new film totally might not be out of the books. We can even expect new characters if that might be the case, but then again, no one really knows what might happen from here on out.

(The above story first appeared on LatestLY on Jun 09, 2022 07:30 PM IST. For more news and updates on politics, world, sports, entertainment and lifestyle, log on to our website latestly.com).