Karen Gillan Birthday Special: From Amy Pond to Nebula, 5 Best Performances of the Guardians of the Galaxy Star!

Karen Gillan is an actress best known for starring in films like Guardians of the Galaxy, Avengers: Endgame and also in shows like Doctor Who. To celebrate her birthday, here are five of her best roles. 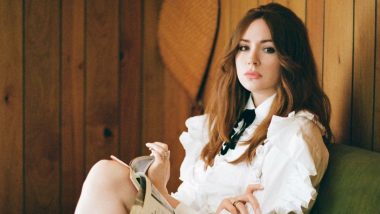 Karen Gillan’s journey in acting has been a fun one to watch. Coming from the humble beginnings of Doctor Who to working with horror mastermind Mike Flanagan, Gillan over the last few years has made a great name for herself in Hollywood. Working in action, adventure and horror – Gillan has showcased the amazing range she possesses and has always brought her best to every role she has portrayed. The Guardians of the Galaxy Holiday Special Review: James Gunn's Marvel Presentation is a True Festive Cheer! (LatestLY Exclusive).

Either it be saving the universe from a huge threat that just happens to be her step-dad or be stuck inside a game simulation as an avatar, she is someone who will deliver on the thrills no matter what. So, to celebrate her 35th birthday, lets take a look at five of her best performances.

While Gillan already had a solid background in action with her role in the MCU films, she decided to take it one step further with starring in the sequels to Jumanji. Beginning with Jumanji: Welcome to the Jungle, Gillan took us on a great adventure ride that surel

Starring Mike Flanagan’s supernatural film alongside Brenton Thwaites, Gillan played Kaylie Russell, a person who was haunted by an antique mirror. The plot might sound a bit weird, but coupled with Flanagan’s direction and Gillan’s performance, it makes Oculus a treat for horror fans.

Gillan’s directorial debut, The Party’s Just Beginning featured a powerful performance from her as well. Portraying Liusaidh, a person who is trying to come to grips with the death of her friend, Karen depicts a great deep dive into how one grieves loss and copes with it.

The role that put Gillan on the map, her portrayal of Nebula has been spectacular over the years. Originally introduced in 2014 with Guardians of the Galaxy, the step-daughter of Thanos has grown to become one of the deepest characters this cinematic universe has to offer, and Gillan is great in this role.

Being the companion of Matt Smith’s portrayal of the Doctor, Amy Pond had some great moments on the show. Portrayed as a woman who was quite sassy, Gillan was a treat to watch in this role and her performance easily made her into one of the best companions the Doctor has ever had. Doctor Who: Sex Education Star Ncuti Gatwa to Replace Jodie Whittaker as the Doctor, Becomes the First Non-White Actor to Take Up the Role!

We can’t wait to see Karen Gillan return as Nebula in Guardians of the Galaxy Vol 3. With this, we finish off the list and wish her a very happy birthday.

(The above story first appeared on LatestLY on Nov 28, 2022 09:36 AM IST. For more news and updates on politics, world, sports, entertainment and lifestyle, log on to our website latestly.com).