As the Fantasy Island actress gets ready to celebrate her special occasion, we take a look at her best clicks from Instagram. 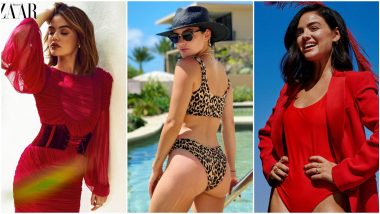 Bionic Woman actress Lucy Hale celebrates her birthday on June 14. While her ardent fans are already busy celebrating this special occasion, we decide to dedicate an article to praise her admirable self. Lucy is a talented, popular American actress who has many amazing projects under her name. But on days when you want to see her real self, we suggest you take a trip to her Instagram account. It's filled with some beautiful memories and unseen pictures that are bound to warm your hearts. Yo or Hell No! Lucy Hale in Jean Paul Gaultier for the FOX’s Teen Choice Awards 2019.

Lucy Hale's Instagram account is a sheer delight to your eyes. From photoshoot pictures to BTS moments and personal memories, she believes in sharing all with her fans. She's her natural self on social media and there's no pretending whatsoever. They are glamorous clicks and then there are some ordinary pictures, ones that we often find in our camera rolls. For someone who's always in the public eye, Lucy doesn't bother much about her starry image and likes to keep it as real as possible. Don't believe us? Check out these different clicks from her Instagram account that should convince you enough. Lucy Hale Birthday Special: From Pop-Chic to Earthy-Hip, Her Style’s Pretty and We Ain't Lying!

From One of Her Photoshoots

With her Adorable Pet

A Rather Hot Still

Nailing Her All Black Look

While Lucy's known for her one too many on-screen characters, the one that we often forget is from the popular sitcom, 'How I Met Your Mother'. Yes, she was very much a part of the show though she has cameo appearances... twice. She played the role of Katie Scherbatsky, Robin's sister whom we meet in season 2. She's the same sister who plans on losing her virginity to her boyfriend while they are in New York. Ted and Robin eventually convince her out of it.

But that's not the point. The real point is that she was a cameo and we almost forgot about it. However, that was just the beginning for the actress and she had so much to achieve then. And we are glad for her success story is definitely inspiring. Happy Birthday, Lucy Hale!

(The above story first appeared on LatestLY on Jun 14, 2021 09:00 AM IST. For more news and updates on politics, world, sports, entertainment and lifestyle, log on to our website latestly.com).