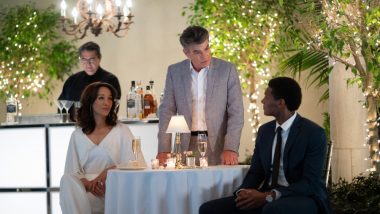 Peter Gallagher, Jennifer Beals, Inanna Sarkis, Pia Mia are all set to star in  PVR Pictures' After. The film is based on Anna Todd’s best-selling novel by the same name, which became a publishing sensation after beginning as fan fiction on the social storytelling sharing platform Wattpad. The After series includes five books from Todd that have been read more than 1.5 billion times on Wattpad. The Simon & Schuster imprint Gallery Books have published four books in the series that are now available in 40 countries. Apart from Hero Fiennes Tiffin and Josephine Langford in prominent roles, alongside Selma Blair, After features a stellar star cast with renowned names like Peter Gallagher, Jennifer Beals, Pia Mia, Inanna Sarkis. Selma Blair Opens Up About Her Role in the Upcoming Romantic Drama 'After'

Anna Todd believes that every single person in the cast is exactly who they should be, even if they are these huge movie stars. The award-winning actor Peter Gallagher plays Hardin’s father Chancellor Ken Scott, and internationally renowned actress, Jennifer Beals plays his bride Karen. On the casting of Peter Gallagher, Todd says, “Peter Gallagher as Ken! I was obsessed with ‘The OC.’ He is so impressive. As soon as we announced him, the fans were mind-blown… especially on Facebook, where I tend to interact with my older fans. Many of them were even more excited about the parents than the kids.”

Gallagher on the other side credits his daughter for the movie After, saying “ I was halfway through a vacation in Ireland, on the way to the airport to pick her up to spend a week together exploring and seeing family, when I got the call about After. And then my daughter called to tell me her plane was delayed almost 24 hours and I told her about After and she said: ‘This is a sign. You have to do the movie.’ So I got on a plane and started looking at the scenes on the plane, and the next day I shot two-thirds of them.  Selma Blair Had a 'Cruel Intentions' Throwback Moment While Working on After.

On Jennifer Beals, Todd adds, “Jennifer Beals was the first adult that we cast and, later on in the series, the friend group gets smaller and the adults get much bigger. When I heard, ‘Jennifer Beals wants to be Karen,’ I was shocked. I didn't think that we were going to have legends in this movie. As the series progresses, Karen and Tessa become really close and Jennifer has this motherly softness about her. She played Karen perfectly to set up for future movies.”

Beals shared her views on the character, stating that “I basically become Hardin's stepmother and am stepping into a tense familial situation. Even though the part is relatively small, I was offered the film by a really wonderful producer Mark Canton, who I've wanted to work with for so long, and I was told that in the subsequent films Karen has a larger presence in the story, and Tessa comes on rely on her. After having played so many people that were really tough, I really am looking forward to playing somebody who operates more out of a heart space than a headspace, somebody who is a caregiver. That will be a nice, refreshing change. I feel really grateful to have been cast as this woman who is so beloved and so warm and is obviously such an amazing mother.”

The filmmakers have cast social influencer and content creator Inanna Sarkis as Hardin’s friend, Molly. On Molly’s casting Anna Todd shares, “The moment Inanna turns on Molly, it's so incredible. She's the most perfect Molly, not because she's mean or super bitchy – because in real life she's a goofy, fun, sweet girl – but there's something about her that makes her the perfect mean girl in the movie.” On her role in the movie, Inanna says, “I'm super excited that I ended up playing Molly because she's some and I'm loving the pink hair extensions. I also love Molly because she's a villain, and she really goes after what she wants. She has an interesting dynamic with Hardin; she has had a thing with him and she is super protective over him”.

Watch the trailer of After here:

The filmmakers have cast Pia Mia, multi-talented recording artist, songwriter, entrepreneur, social influencer and fashionista in the role of Tristan. The casting of Pia Mia was done in a totally different manner, Anna Todd shares, “Pia Mia is a cool person. She's cool online. When we were going through casting, she was the one that I had even heard of honestly,” admits Anna Todd. “Making Tristan female is a twist. For the film, we did a couple of gender swaps, to even out the guy-to-girl ratio. Pia Mia is so sweet, and Tristan is supposed to be really trendy but also has the sweetest little personality, and that's Pia Mia.”

On her character in the movie, Pia Mia quotes “Tristan is the moral compass, the glue, and the level-headed one in the group. She doesn’t really go for the crazy drama: she’s more low-key. Tristan is also very loving, and everyone will appreciate that about her. I think we can all relate to her because there’s a Tristan in every friend circle. She’s the most chill, the blender of the group; she keeps everyone together.”

The romantic drama is all set to release on May 3rd, 2019 in the cinemas near you.

(The above story first appeared on LatestLY on Apr 30, 2019 05:22 PM IST. For more news and updates on politics, world, sports, entertainment and lifestyle, log on to our website latestly.com).