Scarlett Johansson vs Disney: From FRIENDS Cast to Sylvester Stallone - 5 Times Actors Sued Production Houses in the Past 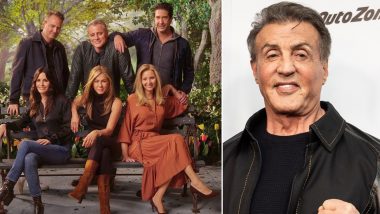 The world woke up to a breaking news when it was published that Scarlette Johansson, the lead star of the latest MCU movie Black Widow, has sued Disney. The actress filed a lawsuit against the company which owns Marvel Studios, for breaching her contract, Scarlette was unhappy with the studio's decision of simultaneously releasing her movie in theatres as well as Disney+ in the US and a few other countries. Scarlett Johansson Sues Disney over 'Black Widow' Streaming Release.

The Wall Street Journal was the first news portal to beak the news. The report stated that the lawsuit was filed in Los Angeles Superior Court on July 29. The actress said that the agreement she signed with Disney-owned Marvel Entertainment only guaranteed an exclusive release of the film in theatres and her salary was based on the box-office performance of the movie, but the makers went on to release it on their OTT platform too. The suit said, “Disney intentionally induced Marvel’s breach of the agreement, without justification, in order to prevent Ms Johansson from realizing the full benefit of her bargain with Marvel.”

The cast of Friends gathered together in 1996 and made the peacock network to pay each of them $100,000 each. They demanded pay raises in 2000 and 2002, eventually earning $1 million per episode in the final season.

Sylvester Stallone starred in the 1997 release film titled The Good Life. The film also starred his brother Frank Stallone. While Sylvester Stallone only had a cameo role in the film, he accused the filmmakers of promoting the film as if he had a starring role. He sued them for breach of contract. The producers filed a suit in return. After a long, 2-year legal battle, both sides settled in 1999.

Robin sued the production house backing A Couple Of Dicks. In 2008, the actor claimed that the production company, Frank and Beans, owed him money on a "pay-or-play" deal. The film was eventually released as Cop Out with Bruce Willis and Tracy Morgan in the starring roles. Disney Blasts Black Widow’s Scarlett Johansson, Calls Her Lawsuit Against Them Meritless.

When Andrew Vajna and Mario Kassar sacked the shoot of Basic Instinct 2, Stone sued them for the losses she incurred. She claimed that the production was trying to set a verbal "pay-or-play" agreement where Stone would get $14 million for the follow-up film and 15% of the back end gross. She had demanded the extra 15% for the other projects that she had turned down to be a part of Andrew Vajna and Mario Kassar's film.

The Back To The Future star, Crispin Glover and his attorney Doug Kari, filed a lawsuit against Universal Pictures after the release of Back To The Future 2. They sued the studio for making a mask out of his old makeup moulds and using it on another actor to make it look like he still is a part of the film. Universal eventually settled the lawsuit with a settlement of around $760,000.

(The above story first appeared on LatestLY on Jul 30, 2021 02:15 PM IST. For more news and updates on politics, world, sports, entertainment and lifestyle, log on to our website latestly.com).