The Office actor John Krasinski has been developing a concept for a show called 'Some Good News' for the past 7 years. Finally, during the COVID-19 lockdown, the actor launched the self-styled show to spread some good news. His dreams took a wild turn today when CBS All Access brought it. 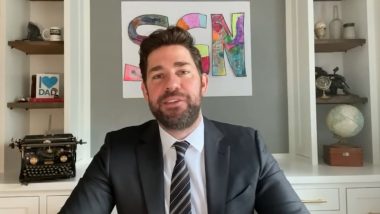 The Office actor John Krasinski has been developing a concept for a show called 'Some Good News' for the past 7 years. Finally, during the COVID-19 lockdown, the actor launched the self-styled show to spread some good news, which the world could really use right now. Of course, the budget and the production of the show was not as grand as Krasinski would have wanted. But his dreams took a wild turn today when CBS All Access brought it. Talk about some good news. The Office Cast Pulls a Surprise Appearance on John Krasinski's Web Podcast; Celebrates Fan’s Wedding By Recreating an Iconic Moment From the Show (Watch Video).

The network actually showed interest in the series and struck a deal with Krasinski. "Could not be more excited and proud to be partnering with CBS/Viacom to be able to bring ‘Some Good News’ to so many more people," Krasinski said in a statement. "From the first episode, our goal was to create a news show dedicated entirely to good news. Never did I expect to be joining the ranks of such a historic news organization as CBS."

Some Good News will stream on CBS All Access, and then move to a parallel channel. It is unclear whether it will be MTV, Nickelodeon, CBS, Comedy Central or some other channel owned by ViacomCBS. John Krasinski Hosts a Virtual Potluck With Martha Stewart, Guy Fieri and More; Stanley Tucci Whips Up an Amazing 'Quarantini' (Watch Video).

Krasinski won't host the show now, but will make a recurring appearance.

Last Sunday, the actor had hinted at the deal after he said that the show is “taking a break for now, but there is more to come!" He announced it with a fan-special episode where he asked the viewers to submit videos of good news. “I will never be able to properly articulate just how much this show has meant to me and what a tremendous honour it has been to share in it with all of you."

He added, "I have been blown away by all the messages I have received saying how joyful this show makes you, how uplifted and inspired you all can be, but I assure you all of the pleasure and all of the inspiration has been mine.”

Krasinski has also directed A Quiet Place Part 2, a horror movie starring his wife Emily Blunt. But the release of the film has been delayed due to the COVID-19 crisis.

(The above story first appeared on LatestLY on May 22, 2020 03:50 PM IST. For more news and updates on politics, world, sports, entertainment and lifestyle, log on to our website latestly.com).

Comments
Tags:
A Quiet Place Part 11 Emily Blunt Some Good News The Office
Comments
You might also like