The song is perfect for the trailer as it’s all about finding your curiosity and it shares a thematic meaning with the vibe the trailer gives off. Honestly couldn’t have chosen a better music choice for the trailer. The Matrix Resurrections is scheduled to release on December 22, 2021. 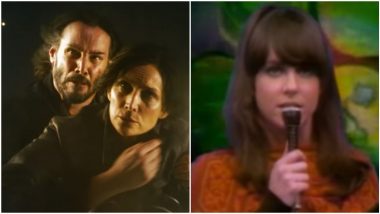 The Matrix Resurrections dropped its first trailer and it has left us watering in our mouths for more. We get to see the return of Neo as he is on a new journey to explore himself. We even get to see new characters who will be joining Keanu Reeves and Carrie Ann Moss on this journey. The franchise newcomers include Yahya Abdul Mateen II, Jessica Henwick, Neil Patrick Harris, Priyanka Chopra Jonas and Jonathan Groff. The Matrix Resurrection Trailer Twitter Reactions: Keanu Reeves in Action, Neo-Trinity Reunion, Priyanka Chopra’s Character Are All Fans are Talking About Right Now!

The trailer might be secretive on what direction it is going to take its mysterious premise in. But it put on display plenty of amazing visuals and action sequences, that left us thrilled. You can check the trailer below.

The trailer will surely have any Matrix fan hyped up as it includes all the physics defying fights and stunts you have come to expect from the franchise. The trailer also boasts a great song that fits the tone of the trailer perfectly. The trailer is synced up to the Jefferson Airplane’s classic song, "White Rabbit".

If you want to sing along to the song too then you can check the lyrics down below.

One pill makes you larger

And one pill makes you small,

And the ones that mother gives you

Don't do anything at all.

And if you go chasing rabbits

And you know you're going to fall,

Has given you the call.

When she was just small.

When the men on the chessboard

Get up and tell you where to go

And you've just had some kind of mushroom

And your mind is moving low.

When logic and proportion

And the White Knight is talking backwards

And the Red Queen's "off with her head!"

Remember what the dormouse said:

"White Rabbit" seeks its visual inspiration from the Alice's Adventures in Wonderland and Through the Looking-Glass. It was released in June 24, 1967. Aquaman 2, Knives Out 2 And John Wick 4 Start Filming; All Three Are Expected To Release In 2022.

The song is perfect for the trailer as it’s all about finding your curiosity and it shares a thematic meaning with the vibe the trailer gives off. Honestly couldn’t have chosen a better music choice for the trailer. The Matrix Resurrections is scheduled to release on December 22, 2021.

(The above story first appeared on LatestLY on Sep 09, 2021 07:58 PM IST. For more news and updates on politics, world, sports, entertainment and lifestyle, log on to our website latestly.com).