Zack Snyder also shared two posters of the film while sharing the happy news. The first poster shows the Justice League logo while the shows a worn-out Justice League flag swaying in the wind. 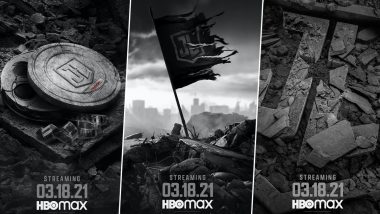 Justice League was one of the most poorly received films in DCEU and many fans felt it was because director Zack Snyder left the production of the film midway. Zack himself claimed that his version of Justice League was very different from what te audience got to see and expressed his interest in showing his cut to the world. Twitter was buzzing in the past, asking for Warner Brothers to make this happen. Seeing the craze, the team decided to give what the audience wanted and announced the Justice League's Snyder Cut will happen soon. Zack Snyder’s Justice League: Not As Mini-Series, Snyder Cut To Release as a Four-Hour ‘One Shot’ Movie on HBO Max! Here’s All You Need To Know.

The fans were excited to hear the news and had been waiting for more updates about the film. Now, days after Zack spoke about how the film will be a 'one-shot, fours hour-long film, the makers have announced the release date of the film. Fans will get to see Snyder's cut from March 18, 2021. Zack Snyder also shared two posters of the film while sharing the happy news. The first poster shows the Justice League logo while the shows a worn-out Justice League flag swaying in the wind.

Earlier reports had suggested that Justice League's Snyder Cut would be divided into four parts and would be released as a mini-series on HBO Max but Snyder clarifies that nothing of such sorts will happen. He had to leave the production of Justice League to attend an urgent personal matter. That is when the studio had hired Joss Whedon of The Avengers fame to take over. They got Whedon to reshoot most of the film, and allegedly changed Snyder's take. Now, it will be fun to see what Snyder's cut will look like and if it impress the audience or not.

Snyder had shot certain scenes of the film according to him and has even added two new scenes to the film. One scene will even involve Jared Leto returning as Joker. During the DC FanDome, the makers had released the first trailer of Zack Snyder's Justice League, that revealed new scenes and footage. Jared Leto Returns as Joker for Zack Snyder's Justice League, Joins Ben Affleck and Others for Reshooting?

(The above story first appeared on LatestLY on Jan 29, 2021 08:10 PM IST. For more news and updates on politics, world, sports, entertainment and lifestyle, log on to our website latestly.com).