The Gangster, The Cop, The Devil: South Korean Film Starring Ma Dong-seok aka Don Lee To Get Hollywood Remake

The popular South Korean film The Gangster, The Cop, The Devil will be getting a Hollywood remake. The original film starring Ma Dong-seok aka Don Lee, made him even more prominent since his breakthrough role in Train to Busan. Ma Dong-seok is now one of the most popular stars in Asia. 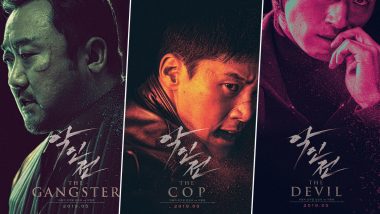 The Gangster, The Cop, The Devil poster (Photo Credit: Twitter)

South Korean crime thriller The Gangster, The Cop, The Devil is getting a Hollywood remake where the original star of the film Don Lee will reprise his lead role as a gang boss looking for redemption in the studio's U.S. version, reports Deadline.  Lee, whose acting credits also include Disney/Marvel's Eternals and Korean blockbusters Train to Busan and The Roundup, is also producing under his U.S banner Gorilla 8 Productions; and alongside Chris S. Our Beloved Summer, Welcome To Waikiki, Kondae Intern - K-drama Series That Showed Their Love For Aamir Khan's 3 Idiots and How They Pulled It Off!

As per Deadline, the remake bankrolled by Paramount Pictures is currently in the early stages of development. The original film, directed by Lee Won-tae, centred on fierce and feared gang boss Jang Dong-su played by Lee, who barely survives a violent attack by an elusive serial killer.

With his reputation damaged, the only way for Jang to restore his image is to find the attacker and exact revenge. He thus forms an unlikely partnership with a local detective to catch the sadistic criminal simply known as K. The Roundup Makes History by Outselling Parasite and Becoming the Top Selling Movie of May at Korean Box Office.

With audiences hungry for Korean content in the wake of Bong Joon-ho's Oscar-winning Parasite (which also debuted at the 2019 Cannes fest), and other breakouts like Squid Game, it's a fine time to be in the Korea game.

(The above story first appeared on LatestLY on Jun 29, 2022 04:32 PM IST. For more news and updates on politics, world, sports, entertainment and lifestyle, log on to our website latestly.com).