Nick Jonas Birthday: From Find You to Close - 5 Tracks Of the Singer That Made Us Fall In Love With His Gorgeous Vocals (Watch Videos) 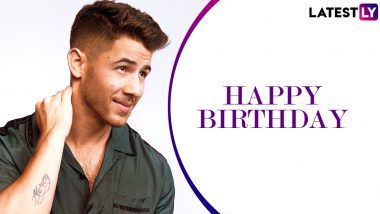 Nick Jonas may have become a household name for many in India probably because he's married to Bollywood actress Priyanka Chopra but if you're a music follower and a Disney fan, we bet you already knew Nick as he has been a part of Jonas Brothers. The singer has made a mark in the music industry individually as well as with the band, Jonas Brothers. Nick has a beautiful voice we bet his songs such as "Jealous", "Find You", "Close" and more have been on your playlist since a while. Nick is also currently a coach on the popular singing reality show, The Voice and truly, we couldn't have found a better singer for that. Priyanka Chopra Jonas Shares a Romantic Picture with Her ‘Forever Guy’ Nick Jonas and It’s Just Unmissable!

Nich celebrates his birthday on September 16 and as we celebrate the same, we take a look at some of his best hits. While we love his tracks, the ones for which he has collaborated with his brothers Kevin and Joe Jonas, on his birthday, we'll be looking at some of Nick's hits from his solo career. The actor in his singing career has collaborated with several artists including Tove Lo Robin Schulz. Here's a look at his best tracks.

This is an amazing song with some peppy beats and catchy lyrics. We bet you will totally dig Nick Jonas' vibe in the video too as he hops onto a bike.

There's an amazing romantic vibe to this one. The song lyrics almost make for some great pickup lines and we bet if you're someone who can't express their feelings easily, this one's a great way to tell someone you like them.

We love this number because it makes for a good club number. The music is not too peppy but has a good electro mix to it. Nick's voice is as always a treat to hear in this one.

Many believed that this romantic number was Nick's dedication to lady love Priyanka Chopra. The romantic lyrics certainly suggest that! Nick collaborated with Robin Schulz for this one.

One of the sexiest musical numbers out there, Nick Jonas collaborated with famed singer Tove Lo for this one. Not only is the song video extremely steamy, the lyrics too are also equally hot. We bet this track hasn't left your playlist ever since you first added it. Nick Jonas Posts A Spectacular Throwback Pic Of His Ladylove Priyanka Chopra Jonas At A Beach!

Nick Jonas has been a heartthrob ever since he was a teen and over the years, our love for him has only increased further. We're thrilled that the Jonas brothers have now made-up and are happy to see the trio kill it with their new album. Here's wishing Nick an amazing year ahead!

(The above story first appeared on LatestLY on Sep 16, 2020 10:00 AM IST. For more news and updates on politics, world, sports, entertainment and lifestyle, log on to our website latestly.com).