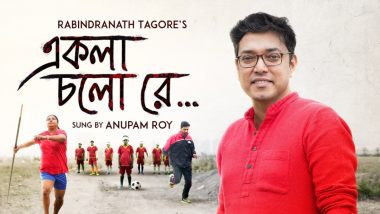 The video stars Indian para-athletes Ujjwal Ghosh, Saheb Hossein, Rubia Chatterjee, Ajibur Rahman Molla, Sufiya Molla and players from the Football Association for the Blind of Bengal (FABB). "This song is an anthem of self-belief. We have grown up listening to this tune since childhood. I am happy to venture into Rabindrasangeet through such a powerful song," he said. Rabindranath Tagore Death Anniversary: Motivating Quotes by Asia’s First Nobel Laureate Who Wrote National Anthem of India

This is the first time the National Award-winning music director and singer has lent his voice for a Rabindrasangeet. The video is streaming on the YouTube channel of SVF.

(The above story first appeared on LatestLY on Aug 07, 2020 06:20 PM IST. For more news and updates on politics, world, sports, entertainment and lifestyle, log on to our website latestly.com).