Rain On Me Music Video: Lady Gaga and Ariana Grande Team Up For Some Futuristic Fun In This Foot-Tapping Track and Fans Can't Get Enough of the 'Queens'!

This is the second song from Gaga's upcoming 16-track Chromatica album, which also includes the previously released "Stupid Love" and "Sine From Above," featuring Elton John. 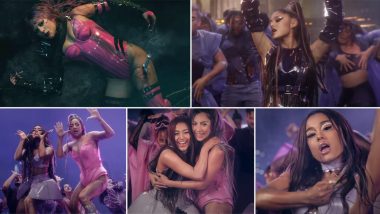 After the audio track of Lady Gaga and Ariana Grande's first collaboration "Rain On Me" was released on Friday, May 22, the music video of the same has now been released. With two great artists like Grande and Gaga coming together, we couldn't have asked for a better combo and were expecting a bit of drama in their song video. The song is like a 90s club hit and was loved by audiences. The music video is surely unlike anything we expected as Ariana and Lady Gaga go for a futuristic setting sporting bright metallic outfits. This is the second song from Gaga's upcoming 16-track Chromatica album, which also includes the previously released "Stupid Love" and "Sine From Above," featuring Elton John. Stuck With U: Justin Bieber and Ariana Grande's Song Sees Them Collaborating with all their Famous and Non-Famous Fans in the Video.

As the song lyrics go, there's quite a bit of rain in this music video. The pink-clad dancers in the background add a dash of 90s rave feels to this music video. Gaga's album seems to be revolving around cyberpunk aesthetic and like her previous video of "Stupid Love", this one too has similar elements. There's a mix of dystopian setting with a proper dance floor in "Rain on Me" and well, you can expect all the drama that their sci-fi-inspired outfits bring.

Fans are loving this power duo of Lady Gaga and Ariana Grande and are already in love with this song that is giving them the much-needed spirit lift-up amid the pandemic. Check out what Twitterati felt about this music video. Lady Gaga Says She ‘Flirted with Sobriety' and ‘Quit Smoking' While Working on Her New Album 'Chromatica'.

This MV Is Everything!

the hair. the makeup. the outfits. the choreography. the friendship. this mv was truly EVERYTHING and even more 🌧🤍 #RainOnMe pic.twitter.com/6XkGx09ffJ

it was hard trying to be the two queens @ArianaGrande @ladygaga 🤩⛈ #rainonme pic.twitter.com/KZzbbTwLQb

The video seems to be already creating a record on YouTube as it has garnered over 9 million views in merely eight hours. It has also tied with Gaga's highest peak at Apple Music with "Shallow". Well, let's just say the ladies are all set to create some history with this one.

(The above story first appeared on LatestLY on May 23, 2020 09:06 AM IST. For more news and updates on politics, world, sports, entertainment and lifestyle, log on to our website latestly.com).

Comments
Tags:
Ariana Grande Lady Gaga Rain On Me Rain On Me Music Video Rain On Me Song
Comments
You might also like