There were rumours that Rajkummar will play Ayushmann's love interest in Shubh Mangal Zyada Savdhaan, but looks like that is not happening 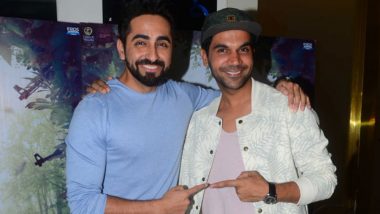 While it would have been a casting coup, Ayushmann and Rajkummar are not reuniting for now

Ayushmann Khurrana and Rajkummar Rao are powerhouses of talent, there are no two ways about it. The actors have managed to impress the critics and masses alike, firstly with their movie choices and secondly with their performances in the chosen films. There was a time when these two also came together on screen. The film was Bareilly Ki Barfi (2017), which was directed by Ashwiny Iyer Tiwari and also starred Kriti Sanon as the female lead. Needless to say, the film received great reviews.

Ever since then, their fans have been waiting to see them together in one frame again. Their wish was about to come true as it was reported that Ayushmann and Rajkummar are set to re-unite for Shubh Mangal Zyada Savdhaan, a sequel to Ayushmann's Shubh Mangal Savdhaan, which starred Bhumi Pednekar opposite him. The second part is a gay love story and it was said that Rajkummar will play Ayushmann's love interest in the film, which is yet to go on floors. Rajkummar Rao and Patralekha Recreate the Iconic DDLJ Climax in London and We are Loving This New Raj-Simran Jodi - Watch Video.

However, according to Times Now, Rajkummar has denied the reports and made it clear that he is not a part of the film. While it would have been interesting to see them together in Shubh Mangal Zyada Savdhaan, but that is not happening, after all.

Talking about the film, a source told Bollywood Hungama, “The idea is to bring out into the open bodily issues that no one discussed. Which is not to say that Shubh Mangal Zyada Saavdhan will go down the same path as the first installment with Ayushmann again. But there will definitely be a flaw in the protagonist to deal with.”

(The above story first appeared on LatestLY on Jul 05, 2019 06:01 AM IST. For more news and updates on politics, world, sports, entertainment and lifestyle, log on to our website latestly.com).