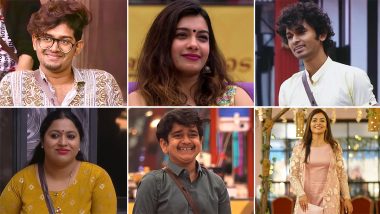 Riyas Salim, Dilsha Prasnnan, Muhammad Diligent Blesslee, Lakshmi Priya, Sooraj Thelakkad and Dhanya Mary Varghese are the top six contestants of Bigg Boss Malayalam Season 4. The reality TV show hosted by Mohanlal commenced on March 27 and today it is the grand finale episode. Out of these six finalists, one of them will emerge as the winner and along with the trophy, the contestant will also take home cash prize of worth Rs 50 lakh. Bigg Boss Malayalam Season 4 Grand Finale: Dilsha Prasannan, Riyas Salim, Lakshmi Priya – All You Need To Know About The Top 6 Finalists Of The Show.

There are numerous predictions going around social media regarding the winner of the controversial reality TV show. Over these 100 days inside Bigg Boss’ house, all the six finalists have displayed confidence, performed each task exceptionally, some managed to stand against injustice and so on. And with all these aspects, Riyas Salim, Dilsha Prasnnan, Muhammad Diligent Blesslee, Lakshmi Priya, Sooraj Thelakkad and Dhanya Mary Varghese won audiences’ hearts. But ultimately there would be just one winner. Who would that be? Bigg Boss Malayalam Season 4 Grand Finale: Date, Time, When And Where To Watch The Final Episode Of Mohanlal-Hosted Reality Show!

So who according to you must lift the trophy of the fourth season of Bigg Boss Malayalam? Who is that deserving contestant? Don’t forget to vote for your favourite ones! Stay tuned to know the winner of the Mohanlal-hosted reality show!

(The above story first appeared on LatestLY on Jul 03, 2022 03:48 PM IST. For more news and updates on politics, world, sports, entertainment and lifestyle, log on to our website latestly.com).