Debutante director MS Anandan’s Chakra, starring Vishal and Shraddha Srinath in leads have finally made it to the big screen. After many troubles, the movie saw the light of the day on February 19. So, is it worth it or not? Well, as per early reviews by the critics, the mystery drama seems mediocre. Read on. 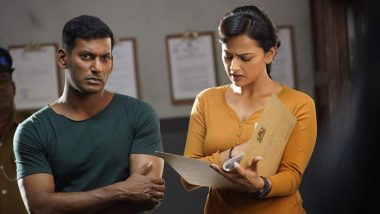 Debutante director MS Anandan’s Chakra, starring Vishal and Shraddha Srinath in leads have finally made it to the big screen. After many troubles, the movie saw the light of the day on February 19. So, is it worth it or not? Well, as per early reviews by the critics, the mystery drama seems mediocre or to put it in decent word, it's an average watch. The story of the South flick is said to revolve around cybercrimes and e-commerce scams. Even after having an engaging premise like this, it has garnered not-so-great reviews. Chakra: Vishal Confirms That His Upcoming Actioner Will Release in Theatres on February 19!

Talking about the storyline of the film in depth it sees Chandru and Gayathri (Vishal and Shraddha) as police officers, who are in search of the robbers/hackers who led to mayhem in Chennai on Independence Day. Will the two be able to unmask the real culprit? To know the answer to this, you need to watch Chakra in cinemas. But before, you take that step, here are some reviews to help you decide to go for the film or not? Chakra: Here Are Few Unmissable Stills of Vishal and Shraddha Srinath from Their Upcoming Film! (View Pics).

"Chakra is supposed to be Chandru’s search for his father’s stolen Ashoka Chakra — a symbol of the family’s legacy. It ends up being the audience’s search for a single moment of cleverness or skill," mentions Firstpost.

Writing about the Chakra's content, The Hindu says, "Director Anandan seems to have taken off from where Vishal’s previous film, the successful ‘Irumbuthirai’, left. While that one had a strong villain and a handful of interesting scenes, Chakra is content at throwing very little challenges at the protagonist who just seems to progress at breakneck speed because he just conveniently knows everything." Chakra Trailer: Vishal Wages a War Against a Cyber Criminal In His Next Action Movie (Watch Video).

Times of India gives 2.5 stars and adds, "Chakra is more focused on momentary thrills. Like the cat-and-mouse stretch in the second half when the hero has to save the incapacitated heroine from the antagonist despite being miles away and battling a hundred goons. Or the well-choreographed stunt sequence (choreographed by Anbariv) in a prison cell when two criminals let loose and attack a cavalry of cops. Beyond such a handful of moments, the film feels rather tame."

"As usual, Vishal shines in the action department. But there are plenty of logical loopholes that we are unable to believe how an army officer can lead the investigation unit. Why does an IPS officer take the backseat and even the Commissioner of Police acts as per the instructions of a mere army man who passes the order to all the cops? The film would've been the same even without Shraddha Srinath. No idea why there should be a romantic interest for the hero in the film?" writes Sify.

To note, Vishal and Shraddha's chemistry and their acting has been lauded, looks like the flaw is in the script and story. Earlier, the movie was supposed to release on the OTT platform, but that plan didn't work and finally, it saw it made it to the theatres. Stay tuned!

(The above story first appeared on LatestLY on Feb 19, 2021 09:24 PM IST. For more news and updates on politics, world, sports, entertainment and lifestyle, log on to our website latestly.com).